Grace Q & A: Is the Message of Grace a false gospel or false teaching? 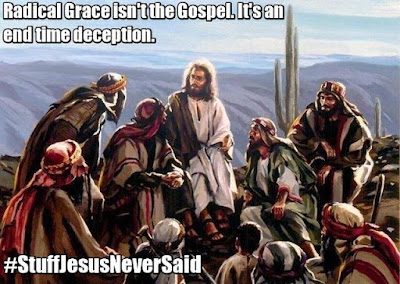 
We've begun a new study getting back to the basics of the Good News of Grace. We've seen that in Christ there is no condemnation. We've seen what cheap grace really is. We've answered the question what about too much Grace.

Today, I sense the strong leading to once again address the objection that Hyper-Grace or Radical Grace is merely a false, end time deception, leading multitudes astray. I have addressed this objection, here, here and here. Just to list a few. It may seem I am belaboring a point but the truth is many are still charging Hyper-Grace as some end time error or falsehood. Also, if you follow the Gospels, Jesus often says to His disciples, the Apostles, "Again, I say to you." It seems He had to repeat things as well, thank God He is patient with all of us as we are all still learning.

Is the Radical Grace of God, in fact, a false gospel? Are we who proclaim Grace leading you astray? What does God's Word, the final authority, the source of truth say on this subject?

In previous posts, I have laid out evidence that Grace is not an end time deception but rather an end time awakening. A Grace awakening. When the status quo is questioned, it certainly stands to reason many will get upset and won't like their way of doing and thinking challenged.

Let's recap the truths that prove Grace is not an end time deception. First, let's detail once again what the Bible refers to specifically as deception and false teaching.

We've also seen that some resist Grace because of wrong thinking. Some leaders feel the need to "control" their congregation. They feel strongly if they don't mix a little condemnation, fear, insecurity in their message the people will cast off restraint and pursue every lustful imagination that comes their way.

Others resist because they have a poor image of God. He isn't their Father, He is their employer. Why are we here? Oh, we are here to serve our master. We are here to obey His rules.

Didn't you know, angels are His servants? He already had angels. If He just wanted servants, knowing He already had them in angels, why create man? Why go through all that trouble of the fall, the Cross, and the resurrection?  They can't grasp that God wasn't looking for subjects but rather sons and daughters. God was looking for a family.

Still, others look at their accomplishments and achievements. They cling to their spiritual disciplines that they perceive brought them success. Perhaps some have seen a level of measured success by following strict spiritual disciplines. What is the real cost though? Their drive may have left many others by the wayside in burnout and being worn out trying to perform perfectly.

What I have seen over an extended time of study and research is at the root of the objection to Hyper-Grace is two major issues. These don't deny the issues I have just raised but better highlights the main objections tradition clings to.

The idea of our future sins being forgiven and our salvation unconditionally eternally secure is false teaching in their minds. Does the Bible affirm our eternal security? Does the Word confirm our future sins forgiven? Yes, absolutely.

12 but He, having offered one sacrifice for sins for all time, sat down at the right hand of God,  Hebrews 10:12 NASB

What about our eternally secure position in Christ? John 10 clearly proves our eternal salvation in Christ. When we receive Christ, we are not on probation. He hasn't rented a room in Heaven for us until we persevere till the end and then transitions it to ownership for us.

In a nutshell, they're upset because they feel Radical Grace tells people not to tell God "I'm sorry" when they sin. I will readily admit that perhaps we can better convey the message when we speak of repentance and confession of sin. That said it doesn't alter the truth that we have been forgiven once for all.

What they fail to grasp is that we don't confess in order to be forgiven. We can acknowledge our sin because we are already forgiven. They don't see that. They in a sense define repentance and confession as an apology. But that's not even the definition of repentance or confession.

To confess is to say the same thing. Repentance means to change one's mind. As believers, we are eternally forgiven. When we realize we missed it, we can come to God an acknowledge that attitude or action wasn't rooted in love and agree with God about it. What are we agreeing to? That the action was a sin that God has already forgiven, and that we are still the righteousness of God in Him.

As for broken fellowship, tradition sees our future sins as some kind of judicial forgiveness but we must still confess our sin to experience a "familial" forgiveness. This is a serious error. God is a loving Father. He isn't breaking fellowship over our actions. Also, God isn't into religious double talk. You're forgiven but not really. In Christ, we are forever forgiven, and He already declared He would never leave or forsake us.

The Radical Grace of God is not a new trend. Hyper-Grace is not some new fad sweeping through the Church. Grace isn't something we instituted to irritate the religious tradition-minded among us. The amazing Grace of God isn't a craze or a message. Grace is the Gospel! It is the Good News of Jesus Christ. It's the truth that heralds freedom for the captive, and deliverance to the oppressed and brings eternal life and forgiveness in Christ to those who receive it.

In summation, is Hyper-Grace some end-time deception? Is Radical Grace some false Gospel message? No. It is the Gospel of Jesus. It is the truth that uproots error and turns over the tables of religion and tradition. Receive it and relinquish religious tradition and find true freedom and peace in Christ Jesus.
SaveSave
Posted by John W Reed at 13:04