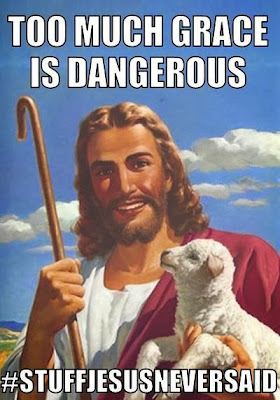 We have been in a continual study concerning the Radical Grace of Almighty God. Up to now we've seen how Grace has redeemed us, forgave us and brought us complete peace. We have also begun allaying myths and misnomers often linked to the teaching of Radical Grace.

The Bible is the source of all truth and wisdom. It reveals to us the true perimeters of what false teaching really is. Allow me to say this. Some traditional ministries would be quick to hurl the accusation of false teaching on those who believe in the Gifts of the Spirit for today. If one prays in other tongues or prays for the sick to be healed they might be labeled as false brethren. In order to distinguish between true and false teaching, we must lay aside petty doctrinal issues.

Denial of the deity of Jesus

1 In the beginning was the Word, and the Word was with God, and the Word was God. 2 He was in the beginning with God John 1:1-2 NKJV
22 And who is a liar? Anyone who says that Jesus is not the Christ. Anyone who denies the Father and the Son is an antichrist.23 Anyone who denies the Son doesn’t have the Father, either. But anyone who acknowledges the Son has the Father also. 1 John 2:22-23 NLT
Jesus is God in the flesh. Any denial of the deity of Jesus is a denial of Him and the Father. Without the deity of Christ, there would be no perfect redemption.

Denying that Jesus became a man

16 And without controversy great is the mystery of godliness: God was manifested in the flesh, justified in the Spirit, seen by angels, preached among the Gentiles, believed on in the world, received up in glory. 1 Timothy 3:16 NKJV
2 By this you know the Spirit of God: Every spirit that confesses that Jesus Christ has come in the flesh is of God, 3 and every spirit that does not confess that  Jesus Christ has come in the flesh is not of God. And this is the spirit of the Antichrist, which you have heard was coming, and is now already in the world. John 4:2-3 NKJV
The denial that God became a man again takes away from the perfect redemption of Christ. God became a man to bear all of our sins in His body. If He were mere spirit how could He die for us taking the full penalty for our sins?

Denying the Resurrection of Christ and the Believer

Altering the simple gospel of Christ

16 Therefore it is of faith that it might be according to grace, so that the promise might be sure to all the seed, not only to those who are of the law, but also to those who are of the faith of Abraham, who is the father of us all Romans 4:16 NKJV
26 For you are all sons of God through faith in Christ Jesus. Galatians 3:26 NKJV
Finally, we see that any ideology altering the gospel message is a false teaching. Universalism/inclusion alter the gospel by saying all humanity is in Christ, adopted, righteous and born again. This takes the amazing out of Grace. Paul clearly states this. He declared it is by faith that it might be by grace.

In summation, all false teaching denies the person of Jesus, His deity, His resurrection and plan for salvation. False teaching points to other avenues of salvation or redemption. Is the Radical Grace gospel a fake or false gospel then?
8 Anyone who comes to you with a different message than the grace gospel that you have received will have the curse of God come upon them! For even if we or an angel appeared before you, to give you a different gospel than what we have already proclaimed, God’s curse will be upon them! 9 I will make it clear: Anyone, no matter who they are, that brings you a different gospel than the grace gospel that you have received, let them be condemned and cursed! Galatians 1:8-9 Passion Translation
Paul is very clear that there is only one gospel, the gospel of Grace. In reality, those who oppose the Radical Grace of God are the ones preaching a different gospel.

It is clear that the Scriptures promote the Radical Grace of Almighty God. Yet no matter how many times we teach the truth the insecure and performance minded still object to the simple gospel. The legalistic, performance focused, effort driven mindset will only accept a "gospel" of rewards and ribbons. The Grace gospel rests in Jesus accomplishments, not our striving or attempts to gain status among men.
Paul addressed the concept of a gospel of rewards and status.
16 we know full well that we don’t receive God’s perfect righteousness as a reward for keeping the law, but by the faith of Jesus the Messiah! His faithfulness, not ours, has saved us, and we have received God’s perfect righteousness. Now we know that God accepts no one by the keeping of religious laws, but by the gift of grace!” Galatians 2:16 Passion Translation

Is Radical Grace a different gospel? No, it is the gospel of our Lord Jesus Christ. It is the message of God becoming a man to rescue and restore His creation that was lost and doomed to an eternal separation from Him. It was God giving His Son in order to gain a Family. It was God in Christ taking all the pain, punishment and peril for all humanity. It is the understanding that there is nothing we can do to earn or achieve this salvation that He freely gives to those who simply receive. Grace is the gospel!
Posted by John W Reed at 13:46