Good News vs fake news: God is an Angry God 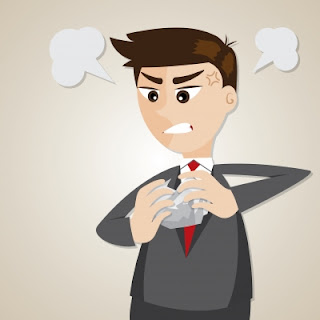 We've been in an extended study contrasting the Good News of Jesus Christ and the fake news of religious tradition. As always, we must keep in mind that we are not fighting people. When we expose the error of tradition by shining the light of the New Covenant, we aren't attacking anyone. People aren't our enemy. Even religious traditional leaders who count us as their enemy, labeling us a preaching a false doctrine.

So far we've seen God isn't cursing us for not tithing. We saw His answer to sin. He isn't holding it against us. We've seen just how forgiven we actually are. Today, I want to address the issue of God being an angry God.

11 God judgeth the righteous, and God is angry with the wicked every day. Psalm 7:11 KJV
17 The wicked shall be turned into hell, and all the nations that forget God. Psalm 9:17 KJV

You see it is clear Scripture. God is angry every day. God is filled with wrath and indignation at the World. He is a vengeful God.

Is this really the image of God? Is this really the Scriptural image we have of our Father? Now I won't shy away from these passages. I won't try and tell you the mean something else when we see them clearly making a statement. What I will show you is the proper context and understanding of these passages. To rightly divide passages like this its best, to begin with this simple premise; God has anger, but He is love!

If you look at the Old Covenant as a whole, we can find times when God poured out wrath and judgment. What specifically is the anger direct at? God isn't angry at people. God is angry at injustice. God was mad at the desolation and destruction sin and the fall brought.

When we understand fully the New Covenant, we will get a better understanding and hold to a better view of our Father in Heaven. God isn't angry any longer. He is forever satisfied with His Son's perfect sacrifice.

Because we don't rightly divide the Word we have embraced a view that our Father is angry and vengeful. In the mind of the religious, God is perpetually angry, indignant and exceedingly disappointed with the World, the Church, and the individual believer. This, in turn, becomes their focus.

No longer is the motive for ministry, fellowship, and spiritual growth, love and intimacy with the Father. Appeasing the angry god becomes the driving force in all areas of the Christian life. We begin referring to time spent reading God's Word, prayer, and devotion as spiritual disciplines. What spouse or parent wants to hear their loved one say spending quality time with them is a "discipline?"

We begin to boast about our love for God. We do all we can to make God pleased with us. We are certain if we slip we will disappoint God and He will be mad at us. Whenever we do miss it we sense that God is now dissatisfied with us and can't trust us.

That isn't a relationship. It's servitude. This isn't relating to our Father, but a servant doing to the bidding of a ruler. God isn't a Father but an austere taskmaster to be feared. Look at how we prepare worship gatherings. We desire to "host Him", so we go to great lengths to sing the "right" songs and such. Here is the real question, in light of His Grace, Jesus Finished Work, and His great love what makes you think He wouldn't want to come visit with you?

Reject these notions. God is our Father. God is in a good mood. He isn't angry with you or anyone for that matter. God is love. His love is long-suffering and eternal. He is not wroth or indignant at anyone. Jesus final sacrifice was enough. He bore all the punishment and wrath for all sin and God the Father has accepted this payment.

When we perpetuate the angry god image, we are in fact making light of Christ's Finished Work.
“For this is like the days of Noah to Me, When I swore that the waters of Noah Would not flood the earth again; So I have sworn that I will not be angry with you Nor will I rebuke you. Isaiah 54:9 NASB

God is no longer angry? Hyper-Grace preacher, Paul himself said the wrath of God abideth on people, what about that? Paul did say that. Once again we need to rightly divide what Paul is saying. He calls these the children of disobedience. What is their disobedience? They have rejected the free gift of Grace. By rejecting Grace they aligned themselves with the enemy and become partakers of the wrath that's on him already.

We see an account in Mark that angered the Lord Jesus Christ. When religious leaders hindered God's people from receiving His goodness it angered Jesus. God's love was extended to all. Yet the religious rejected His goodness. They also went so far as to try and hinder others from receiving. This doesn't make our Father happy. The beautiful picture of Grace was manifest as Jesus in spite of religious tradition moved in their midst and made His goodness known bringing wholeness. Let's always side with His goodness. Let's never hinder what He wants to do in anyone's life.

In summation, know and understand your Father. He is not an angry Father. He is love. God is love! God so loved the World He gave His Son. If He so loved His enemies how much more is His great love extended and seen toward His own family? Our Father isn't a bitter God. He isn't a perpetually angry God. He is good and only does good. don't perpetuate these negative images of Father God. Remind the World and the Church, we have a Father in Heaven who is faithful and just and loves unconditionally.

Image courtesy of iosphere at FreeDigitalPhotos.net
Posted by John W Reed at 09:49