The Gospel of Grace: Reality of Complete Forgiveness 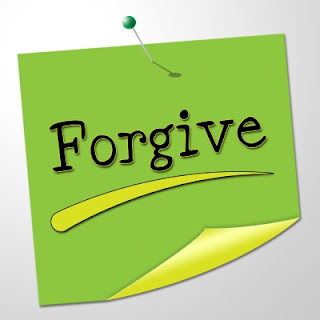 Today, it seems good to look at the reality of our complete forgiveness in Christ Jesus. Knowing we are forgiven of all our sins removes the burden and heavy load fear, condemnation, shame and guilt put on us. This is why the enemy works overtime to deceive many into thinking they are only partially forgiven or that God reserves the right to withhold forgiveness if we sin too much.

It is an insidious lie from the enemy that convinces people that they are not totally forgiven. Hearing we are forgiven past and present and future staggers our natural thinking. It seems too good to be true. It can't be. So initially we may react to the Good News by rejecting it. I know I had a momentary reaction of could this really be? That is my heart, my spirit man leaped at this Good News but my mind was so astounded I wanted more confirmation.

I searched the Scriptures. I was hearing this Good News preached in book and television from this anointed man of God from Singapore. He gave Scriptures. Yet I had to search for myself. I saw that the Scriptures not only confirmed this, I also saw that God's Word heralded these glad tidings over and over. Then God spoke within my heart and gave me a perfect illustration of this complete and total forgiveness.

When I was a young man myself and another family member attended a Veteran's Day parade. We were on street level and could only see a float or two on the left or right of us beside the one directly in front of us. Some people relayed we could get a better view from the top floor of a parking garage nearby. We agreed and went to the top floor. From that view, we could see the entire parade. We were able to see every float, from the last one to the very first one.

God reminded me of this event. He relayed to me that, that is how He sees all those who've received the free gift of Grace. He sees their whole life from start to finish, from their first breath until their last. He looks at their entire life and says FORGIVEN! When I saw this, and Scripture confirmed this, I knew we were forgiven past present and future!

14 who bought our freedom with his blood and forgave us all our sins Colossians 1:14 TLB

12 I am writing to you, little children (believers, dear ones), because your sins have been forgiven for His name’s sake [you have been pardoned and released from spiritual debt through His name because you have confessed His name, believing in Him as Savior]. 1 John 2:12 AMP

2 He is the one who took God’s wrath against our sins upon himself and brought us into fellowship with God; and he is the forgiveness for our sins, and not only ours but all the world’s. 1 John 2:2 TLB


32 Instead, be kind to each other, tenderhearted, forgiving one another, just as God through Christ has forgiven you. Ephesians 4:32 NLT

What I've posted is the Scriptural proof of just how many sins He has forgiven us. He forgave us all our sins. Not just some, not just past, but all of our sins. We are forgiven past and present and future.
Now religious tradition plays semantics and word games. They see these same passages and some will only assign these to our past sins up to the point of conversion. After that, we are responsible to confess each and every one of them or we won't be forgiven.

So, as a result, we become sin conscious and not righteousness and forgiven conscious. The Church as a whole has a sinner image. That is they see themselves as a sinner and not the Righteousness of God. Just ask your average Christian. Are you righteous? Are you just as righteous as Jesus? Are you forgiven of all your sins?

More often than not the response will be "I hope so" or "I am not so sure, I messed up recently." We need to identify with the risen Christ and His Finished Work. Agree with the Cross. We are eternally forgiven.

What if we sin after we receive Jesus and this once for all forgiveness? Do we need to confess our sin in order to receive forgiveness of that sin? First, this is a relationship with our Good Father. When we blow it, we don't run from Him. We don't even have to run to Him because He isn't separated from us, He is right there with us. He never left us.

Also, because we are already forgiven we can confess our sin. This is not the fearful, religious practice of confession in order to be forgiven. We don't confess our sins in order to receive forgiveness. Because we are already forgiven we can be open and honest about our faults and flaws and struggles. I am talking about communicating with our Dad in Heaven, It is being in agreement of what God already said. It's the relationship we have with God.

Because our sins are forgiven forever and God is no longer counting our sins against us we can find freedom. Not freedom to sin more,(although He will let you make dumb choices with your freedom but be prepared for dumb consequences, and these consequences are not God's punishment or God judging you), but freedom from sin. In the midst of our darkest moments, no matter how far we've fallen, He is there reminding us of whose we are and who we are in Him.

Acknowledging our faults and failures to our Father who loves us unconditionally, who isn't accounting our sins against us, who is not seeking ways to punish us, but to lead us to total freedom, brings hope, help, and healing. It brings the realization that the Cross has already destroyed the yokes. It opens our eyes that He already broke the chains, already loosed us from all sin and bondage.

In summation, rejoice. You who've received this free gift of life eternal are forgiven once for all. You're forgiven past and present and future. God isn't holding your sins against you. He has set you free once for all. Rejoice in this great Good News!
Image courtesy of Stuart Miles at FreeDigitalPhotos.net
Posted by John W Reed at 14:39