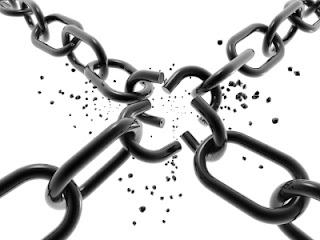 
Today, I want to address an issue that is essential in understanding the Gospel of Jesus Christ in its fullness. That is fully embracing what Christ accomplished in the Finished Work. In order to do this, we must first relinquish traditions that bring doubt and confusion concerning God's best for us. So today, I want to address the importance of overcoming traditional religious concepts.

Jesus the Person of Grace, made it clear, tradition makes the Word ineffective in your life. Think about it. Before you heard the Good News of salvation by faith, you lived your life apart from God, lost and spiritually separated from God. The Finished Work was complete. Jesus had accomplished all He came to do. Redemption was already available yet until you acted upon this truth you remained lost. The truth was ineffectual until you knew and understood it.

So let's look at some of the most common traditional religious concepts and see the truth of the Word eradicate that falsehood.

There's something the matter with you!
I am using this phrase to include several common misconceptions. Traditional Christian gatherings with their songs and sermons can be summed up this way; God is good, Jesus was perfect, but you are bad. Sadly, many unconsciously feel that if they haven't been reminded how bad they are they really didn't have a truthful, sincere, faithful worship service.

I've even heard some ministers say things like its good to "beat up" the sheep with our preaching, just don't "beat them down." In essence, saying harsh preaching is productive because it beats them upward. Meaning it causes them to improve their behavior patterns.

Another misconception under this banner is the guilt syndrome often associated with it. Phrases such as "you're coming up short" or "you know you could be doing more." Sometimes it displays itself with leaders parading someone in front of others who volunteer their time. Or one who gave a large donation. Or who supposedly spends hours in prayer and Bible study. The unspoken point is if they did this much surely you can do more.

These concepts rob us of experiencing the sweetness of an intimate relationship with our Father. Guilt, comparing ourselves to others, introspection motivated by shame, only produce a fractured view of God, it produces an orphan mindset. The Truth removes these errors.

The Truth of the Word says we are made the Righteousness of God in Christ.  The Truth says we are accepted in the Beloved.  God tells us who we are not man. Our value and worth are seen in the great price Jesus paid for us. God is good, Jesus is perfect and because of the Blood, there is nothing the matter with you.

God's Love and mercy have limits.
Just listening to the messages of some ministers and it seems God is still angry and filled with rage. That at any moment He is poised to pour out wrath. I can't count how often I've heard preachers say God's going to have to apologize to Sodom and Gomorrah if He doesn't judge America.

The message many cling to is the idea that though God judged sin in the body of Jesus on the Cross, He is still judging nations today for their sinful living. Many proclaim God loves you to the lost but when the lost act lost the message turns to God will get you for that!

The truth of the Word overrides this tradition.

8 The Lord is gracious, and full of compassion; slow to anger, and of great mercy. 9 The Lord is good to all: and his tender mercies are over all his works. Psalm 145:8-9 KJV
How clear can this be? This is who God really is. Isaiah prophesied of the New Covenant that God would never be angry with us. Know the truth, God is forever satisfied with Jesus' once for all sacrifice. He is not pouring out judgment for sin. Jesus bore the sin of mankind. God is faithful and just.

You can exceed and exhaust His Grace.
Many traditional preachers will casually mention Grace but quickly dismiss it when discussing the failures and shortcomings of believers. It's as if Grace was the cover charge for your entrance into God's family but your conduct is what really matters, that is it's what keeps you in the family.

The truth clears up the confusion.
29 For the gifts and the calling of God are irrevocable. Romans 11:29 NKJV
His Grace is inexhaustible! His mercy is new every morning. You've never gone too far. God will never leave you or forsake you.

God is the author of your trouble, tribulation, tragedy.
Listening to some leaders it seems God plots, plans or preordains disease, destruction, devastation, and death. Like God in His infinite wisdom has some mysterious motive for killing your offspring or bankrupting your business.

This concept is such a deep-rooted stronghold in the minds of so many believers. It has helped create major theological schools of thought. When in reality, mankind experiences harsh and difficult circumstances and want to assign God some role in it. As if it would cause God to be less than omnipotent if He didn't at least allow it.

The problem with this concept is that it removes any and all personal responsibility for our life choices. It also puts a blight on the character of God. It turns God into a puppet master.

The truth cancels this terrible traditional concept. Jesus was God manifest in the flesh. Not one place do we see Jesus sending famine or pestilence to a nation. We never see Jesus cause someone to become disease ridden or bankrupt. Jesus healed all who came to Him, He didn't make them sick or afflict them a terminal illness. He never killed a child so God could have a flower in Heaven.

What we do know is that God is always good. He is a good Father. We praise Him in the midst of the mystery. The truth of the Word says He is faithful and just. Jesus Himself said if you've seen me you've seen the Father. The truth causes us to trust Him more and more especially in dark times. We couldn't trust Him if He was the One bringing the tragedy.

In summation, we can always trust in God. When we remove traditional concepts our relationship with God flourishes. We see God is for us and not against us. We don't feel abandoned or shut out from His presence. We don't wallow in guilt or shame. We know His Grace is inexhaustible. We know He is our good Father and always has our best at heart.
Image courtesy of David Castillo Dominici at FreeDigitalPhotos.net
Posted by John W Reed at 11:16