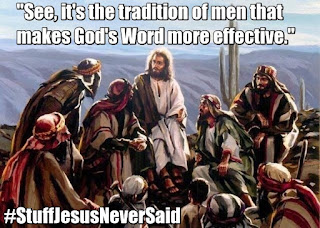 We've been in a study as of late concerning God's Grace and the wholeness it brings. As I was studying on the healing and wholeness Grace provided, the Spirit captured my heart. It was made clear to me even stronger that in order to be fully whole we must relinquish all the religion and traditions in our lives.

Look, I am not attacking these Christian denominations or churches. I am talking about the traditions of men that allow believers to come in and not see Jesus as the focus of it all. I am talking about coming into a gathering, whether you sit reverently, or lift your hands, or even dance a little dance but never have an encounter with the risen Christ and receive of His Grace and the gift of righteousness.

It's time we lose the religion. Listen, we've all experienced the guilt, the shame, the condemnation and burdensome weight of religious tradition. Let's see Jesus' thoughts on religion.

3 And He entered the synagogue again, and a man was there who had a withered hand. 2 So they watched Him closely, whether He would heal him on the Sabbath, so that they might accuse Him. 3 And He said to the man who had the withered hand, “Step forward.” 4 Then He said to them, “Is it lawful on the Sabbath to do good or to do evil, to save life or to kill?” But they kept silent. 5 And when He had looked around at them with anger, being grieved by the hardness of their hearts, He said to the man, “Stretch out your hand.” And he stretched it out, and his hand was restored as whole as the other. Mark 3:1-5 NKJV

This clearly illustrates the religious tradition of men. They were more focused on men keeping the letter and not disturbing the traditions rather than seeing a broken man made whole again. It's the same today.

We see broken men and women, marred by the pain of divorce. Be it as the result of betrayal or abuse, seeking to find a future peace and happiness only to hear the voice of tradition rise up proclaiming, no, solitude and singleness is your lot. If you remarry you're a sinful adulterer.

Broken young men have come to the Church looking for restoration and to find salvation. Yet, they didn't look like everyone else and didn't wear a three-piece suit. They had piercings or tattoos or long hair. They were driven out of the church until they could "clean up their act."

Godly women who had received God's gifting and Grace upon their life to proclaim liberty to the captive and recovery of sight to the blind and to tell of the great love and freedom in Christ are silenced. Tradition keeps them quiet saying women shouldn't speak in the Church. They then create the inconsistent tradition women can teach children and other ladies but other than that sit-down and shut up.

There are those sick and broken. They are hurting. They have a disabling disease. There are those trapped in the bondage of cruel addiction. The tradition-bound leader proclaims Jesus can't help you. His healing power was only regulated to 2,000 years ago.  Hope you can find a good doctor and hopefully you have good insurance.

What are Jesus' thoughts? Jesus hates tradition for it robs His people of all He purchased for us. Religious tradition grieves Him because He knows how it hardens the hearts of those who follow it.

We likewise need to move pass tradition and bring Jesus and His wholeness to all. In the sense of deserving by our doing, we are all unworthy. We were all broken, lost, fallen ones. We rebelled against God. We've gone our own way in the past. There isn't one person who deserves, by their own merits, good works, accomplishments any of God's goodness and favor. That's why this is the Gospel of Grace. We, therefore, can't withhold this goodness and Good News from anyone.

When we say lose the religion, we aren't speaking of denying the clear truth of God's Word. We are talking about relinquishing the traditions of men. A performance-based faith, the striving, and works syndrome. The loveless message of religion. The God is always angry and disappointed in the Church mindset. The "you need to be doing more to please God" concept. The powerless claim that Jesus can't heal or restore today. We're speaking of resisting the accusations, the guilt, the shame and condemnation traditional religion brings. It's time to embrace Grace.

In summation, if you want to find fulfillment, and wholeness let go of religious tradition and embrace the Grace. God wants you to know how loved and accepted and redeemed you are. He wants you to encounter Him on an all the time basis. He is always with you and He is always cheering you on. Jesus believes in you. Tradition, like Law, will only point out your flaws, your missteps. His Grace points you to your identity in Him. It reveals your new nature, who you are in Him and how victorious you are in Him. Embrace Grace.
Posted by John W Reed at 11:12