Losing our Religion: What about Paul's thorn in the flesh? 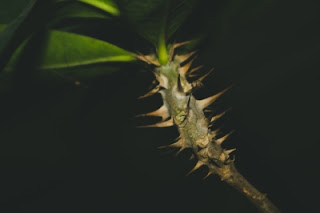 We've started a series of study concerning the benefits of letting go of the tradition of men. We are seeing more and more how stifling religious tradition is to intimacy with God, maturing in our walk with Him and how it turns people away from God. As we study more, we see God in all His goodness and love and turn loose of any traditional religious thinking.

Today, it seems good to share on a subject that has held many believers in bondage. This account in Scripture has produced so many traditions that cause people to not trust God for wholeness in every area of life. I am speaking of Paul's thorn in the flesh. You can read the few verses of the account here.

The enemy loves to sow discord and confusion into the Church. This event in Paul's life has caused much confusion and brought about much debate among the saints. The Scriptures rightly divided offer no confusion, but traditional religious interpretations of God's Word will create uncertainty and misunderstanding.

There are three main traditional views of Paul's thorn. Let's address them in order.
1. God gave Paul a thorn in the flesh to keep him humble and to stop him from becoming prideful/Paul was getting too prideful and needed humbling.
Look at many commentaries and you will see this taught. Some translations even put this in the text. Is this an accurate understanding of what it means to be exalted above measure? Is it also accurate to think, the enemy would be the agent used to ensure Paul would remain humble?

In order for this to be the right assessment of why Paul was given this thorn, we need to see if satan would keep Paul from being prideful. In order to properly evaluate this, allow me to remind you of something.
He beholds every high thing; He is king over all the children of pride.” Job 41:34 NKJV.
God declared this about satan. He said the enemy is the king over all the children of pride. In fact, what was the original sin found in satan? Pride!

Now, let's use some wisdom and sound judgment. Why would God in His infinite wisdom assign satan the task of keeping Paul from becoming prideful? This leads to another obvious question. Why would the enemy want Paul to remain humble? Wouldn't the enemy do all he could to tempt Paul to become more and more prideful?

This view is twisted logic. It's based on the twisted and inconsistent concepts of the traditions of men. This teaching that God wanted Paul to remain humble so He brought satan in to ensure it clearly contradicts the whole of Scripture and the very nature and character of God and the enemy.

2. Paul's thorn in the flesh was some sickness or disease.
This is one of the most widely held traditions concerning Paul's thorn. The idea is God sees Paul is puffed up so He makes him sick and disease-ridden to keep the pride away.

What's at root here is the twisted religious idea that God brings evil to better us. That He brings destruction to our life to straighten us out. That in order to get our full, undivided attention He brings to us destructive, tragic circumstances or He puts a crippling, tormenting disease upon us.

Jesus was God in the flesh. When He walked the sandy shores of Galilee He was fully God. When did He ever bring a debilitating disease on Peter to correct his erring ways? When His inner circle of disciples wouldn't watch with Him for one hour, did He cause them to experience bankruptcy, or kill their loved ones in some terrible accident? Did He whip up some devastating storm that destroyed all they owned? Did He bring a pestilence upon them?  Really nothing like that to perfect them, to instruct them? Nope, nothing at all.

When Jesus was here on Earth, we have no record of Him bringing destruction, disease, death or famine on any persons or nations. Think. Jesus said a kingdom divided will not stand. If God our Father made people sick and Jesus turned around and healed them, they would be actively working against each other. The Kingdom would be divided and therefore not stand.

You may say but Paul said it was a thorn in the flesh. This must mean it was a sickness. Not true. This was merely a figure of speech. Much like today, have you never heard someone say this is a pain in the neck? Is it literally a pain in the neck? Of course not. Some even go so far as to say this or that is a pain in the rear. If Paul had used that expression, some "theologians" would suggest Paul experienced painful hemorrhoids all his life.

If we follow the Scripture you can see these types of expressions used. Here are just a few examples, here. Another place here. One more here. Proving again, this phrase is merely an idiom used to describe a situation facing Paul.
3. God told Paul, "No!"
This is the saddest thing to hear taught. Imagine coming to God our Father for help only to be told no. Does this sound like God? Is this what a good Father would tell His children?

The idea taught by tradition is Paul asks God for help, healing, and deliverance and God tells him no. God basically tells him to keep suffering it is best for you. They see where God says my Grace is sufficient, and come to the conclusion that God told Paul, the fact you're saved is all you need. Be content in your suffering.

This is not what God said to Paul. He never told Him no. He simply told Him Grace is sufficient. In other words, what you already have is sufficient to deal with this.

Going back to the text, look closely at what is going on. Don't isolate this account and try to use it to explain difficulties and challenging circumstances. The truth is we live in a fallen and fractured creation. Nothing will be perfectly just and right until Jesus returns and completely transforms this place.

Paul says in order for him to no be exalted overmuch he was given a messenger of satan to buffet him. This word buffet is to attack, strike hard with a fist. Is God assigning satan to beat Paul up to keep him in humility?

No, for two reasons. One God commands us to humble ourselves. He didn't say I am going to use satan to humble you. Secondly, He says He will exalt us in due time. So being exalted doesn't always mean prideful arrogance.
6 Therefore humble yourselves under the mighty hand of God, that He may exalt you in due time, 1 Peter 5:6 NKJV

This phrase about being exalted above measure is used only twice in Scripture. Here and in the Epistle to the Thessalonians.  One describes arrogantly exalting oneself describing the end time work of the enemy. This phrase here Paul is speaking of exalting over the measure of the enemy's influence.

The enemy was fighting this New Covenant. He wanted to keep the Jews bound to Law. He wanted to put the Law on the Gentiles. Paul had this revelation of Grace and was sharing it setting so many free. The enemy, the messenger of satan, the word used for angel or messenger, was a religious spirit stirring up the religious to publicly resist Paul wherever he went.

This is what the thorn was. It was the religious trying to prevent the people from experiencing the freedoms of Grace and the New Covenant. Everywhere Paul preached they would be stirred up. Paul did seek God for deliverance.

God didn't tell Paul no, just suffer. What He said was my Grace is sufficient. This word sufficient means to be possessed of unfailing strength. It speaks of defense and the ability to ward off an attack. In this strength, it also connotes the idea of contentment.

Grace is the unearned undeserved favor of God. What God told Paul was Grace is more than enough. The more the enemy attacked the more Grace superabounded. This is why Paul began to rejoice when He was insufficient in himself. He knew then that his ability couldn't bring it to pass, but God and His strength and power were more than enough to get the job done.

Look at Paul's life. Yes, the enemy brought much persecution. Yet all in all Paul's message of Grace, the Gospel, righteousness and the New Covenant was boldly proclaimed everywhere and the message continues to this day.

In summation, let go of twisted religion. God was there for Paul just like He will be for you. In fact, there is an end to this story. God did, in fact, deliver Paul.
11 persecutions, afflictions, which happened to me at Antioch, at Iconium, at Lystra—what persecutions I endured. And out of them all the Lord delivered me 2 Timothy 3:11 NKJV
God is our good Father. We can lean on Him. Trust in Him. Rest in His favor for us. The enemy is defeated and Jesus is our triumphant King and He has made us more than conquerors, so rejoice!
image courtesy of jeswin at FreeDigitalPhotos.net
Posted by John W Reed at 13:01

Wow thank you for this
Karl

So glad it blessed and encouraged you Karl