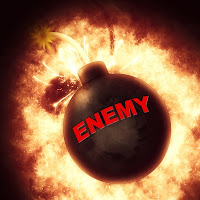 We've been in an extended study exposing the opponents of Grace. Paul instructed believers to stand fast in our liberty in Christ. To stand fast means there exist something to resist. In Christ, you have triumphant victory, so you need not fear or succumb to defeat by these schemes of the enemy.

The enemy always seeks to remove you from Grace ground. He steadily uses every means at his disposal to see that you relinquish Grace and fall back into works, efforts, and performance. Why is this?

Because if he can get you back into a works or efforts and performance rooted relationship with God, he can utilize his greatest weapon against you. That is the deepest root of all, the root of condemnation. The enemy first brings condemnation though, in the most obvious way, through temptation.

The enemy tempts or allures you with the sin that is based upon your own unrenewed desire. The enemy brings the temptation, sometimes you fall for it and give in. This gives him the opportunity to bring accusations, which also gives place for him to bring condemnation to you. That is his vicious cycle. Tempt, accuse and condemn.

Clearly, we can see the condemnation he brings when we miss it. This is one of his major schemes, but this is seemingly the only one the Church as a whole is aware of. But are you aware of his most subtle scheme? The enemy's most subtle attack is through efforts based Christianity.

When I say effort based I am not saying Christianity is an inactive, passive, lazy existence. I am speaking of a relationship rooted in our doing, our abilities, our performance, our faithfulness and not rooted in His faithfulness. If you base your relationship with Christ upon how well you perform, you are setting yourself up for failures and disappointments.

He says "You call yourself a Christian." "How could you do that?" "Look how little you gave, brother so and so gave way more than you." "You haven't been so faithful in your prayer and devotion times, you really think God will answer your prayers?"

When we are basing our relationship with God upon our doing these words will pierce our thinking. They will bring hesitancy to our prayer life and in our worship and approach to Father God. When we hear accusations it gives place for condemnation to take root.

This is his most subtle attack. You believe you are working harder to become more Christ-like and in reality, you're trapped on a performance wheel. We allow condemnation to drive us to do good things or devote more to Christ. When we do this, we eventually burn out because it isn't Spirit led or directed activity. I've seen people getting up earlier and earlier in the morning to spend time with God, but God didn't lead them to do this. Religious condemnation rooted tradition motivated them. Sure enough, they cease this action over time and then feel condemned when they do.

The original King James and some other translations add a clause, if you will, bringing a condition to this promise of no condemnation. I want you to rest assured that highly respected scholars have proven the older Greek manuscripts do not have that clause added. Some have even speculated that the scribes added this clause because Paul's Gospel smelled too much of Grace. Some have a disdain for the truth of eternal security so they push for this added clause. (Here is a great source exposing this truth about the proper translation.)


Too Much Grace is Dangerous

This is the motto of religion but in reality, it is the theme of the enemy satan. When you know there is no condemnation in Christ, period, no clause, no conditions the enemy loses his stronghold in your mind. When you know you are in Christ Jesus and fully secure in Him the enemy's assault of accusation accompanied by condemnation loses its power over you.  When the enemy brings the accusation so he can get condemnation to once again take root you can respond with the truth of the Finished Work.

When he says "You didn't make time for your devotion today. You didn't pray today, and you call yourself a believer." You can respond, "Shut up devil! I am in Christ, I don't ever have to read or pray. I am in Him. My relationship with my Father is none of your business!"

Don't allow him to be the spiritual motivator in your life. When you do you allow condemnation to take root. Because then you're engaging in spiritual activity not out of relationship but fear and the accusation of the enemy. The thought floods your mind that God will be displeased with you for not engaging in a spiritual activity. You begin to see God as the difficult to please harsh taskmaster and not as your Father who rejoices over you with joy.

Sadly, a majority of Church leadership utilizes this exact motivator to get the people to pray, engage in devotional times and to give. Saying such things as "God has done so much for you. Can't you do something as simple as come to church or give?" The people hear these accusations and again condemnation takes a deeper root. The people begin to work harder or they just give up and quit the church.

Allow Christ and His love and life-transforming Grace to be the only spiritual motivator in your life. Lean into Christ and not religion. Jesus has an everlasting love for you. He isn't keeping score. He isn't tallying up your good points to see how they measure up to the negative in your life. We are in a relationship, not a ritualistic religion. We are in Christ.
Image courtesy of Stuart Miles at FreeDigitalPhotos.net
Posted by John W Reed at 12:05