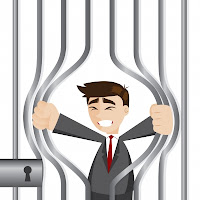 We've been in an extended study of the great Grace of Father God. This isn't minuscule Grace, but great Grace. We've seen just how forgiven we are the role of confession, and distinguishing between performance and genuine faith that receives what Grace freely provided in the Finished Work.

Today, I'd to address this issue of guilt in the life of the New Covenant believer. I also want to answer a question that torments us at times. What are we to expect concerning the troubles of our own making?

Think of it. Most believers can accept that God will forgive us our mistakes and missteps and foul ups. Sure He will be merciful when we through deception enter in error. What if we purposefully, willfully enter into sin or misdeeds what then? Surely God won't forgive us if we willfully sin.

If we look at Hebrews 10 in full context we see Paul saying (I believe Paul wrote Hebrews) to unsaved Jews who had heard the Word of faith, the Gospel of Jesus. He revealed that the Finished Work was the once for all sacrifice. If they wished to reject this offering, and embrace the Law and temple sacrifice, they've willfully sinned the sin of unbelief. There is no other offering accepted and so apart from Christ, their animal sacrifices wouldn't provide the forgiveness they needed.

Where sin abounds, Grace much more abounds. Hebrews 10 isn't about believers losing their salvation. Those in Christ are forever secure in the Father's loving hand. His Grace has already forgiven all our sins in Him. Yes, even the sins of our own making.

I know it doesn't seem fair or just. I mean why would God forgive sins that were intentionally committed? The answer is provided in James.
14-15 When a person is carried away with desire, lured by lust, and when desire becomes the focus and takes control, it gives birth to sin. When sin becomes fully grown, it produces death. James 1:14-15 Voice

The reality is all our sins are willful, committed on purpose, and premeditated. We sin because some portion of ourselves wanted to. When we received Him, know He forgave us of all our sins, which means He forgives intentional sins.

Is there a Biblical illustration proving God forgives and redeems and restores people who created trouble by their own doing. Take a journey into the life of Abraham.

Abraham was known as Abram prior to God giving him the name Abraham or father of a multitude. God made Himself known to Abram. God instructed him to leave his dwelling, all he ever knew and follow Him.

Shortly thereafter we see Abram involved in trouble of his own making, here. Now, what does this passage reveal? What did Abram do?

Abram, operating in fear, allowed his wife to be given to another. We see Abram lie and say Sarai was his sister and not his wife. What was the Lord's response?

I'm sure God said, this is your bed, you made it, you lie in it! Did God give Abram a healthy dose of guilt over his actions? Did God just let Abram suffer the consequences of his sin and not intervene?

In the passage, we see God's hand still on Abram. He intervened so that Pharoah wouldn't take Sarai as his wife. We also see God turn the situation around and during a time of famine abundantly bless Abram. God blessed Abram and protected him because of His goodness and mercy, not Abram's.

With God's goodness abounding surely Abram learned from the troubles he made? Surely he wouldn't ever repeat this action. Let's look at a later time in Abraham's life, here.


Greater than all guilt

Abraham once again fouled up. He repeated the very same mistake. Surely God would've said Abraham you're one and done. I bailed you out back in Egypt. You're on your own this time.

Thanks be to God our Father isn't like that. Think of it, Abraham was unfaithful not trusting God. He lied, put his own needs ahead of his wife's and God still turned this situation around for his good. What a loving good Father we have.

In this account, we see another powerful truth at work. Not only does God turn this situation around, He also answers the prayer for the healing of Abimelech offered by Abraham. Think of it, after we blow it and foul up how many feel the confidence to pray for healing and expect an answer?

What are we to make of the troubles of our own doing?

In the life of Abraham, we see illustrated clearly that God is greater than willful mistakes. He is greater than all the troubles of our own making. If He can turn it all around for our good, even when we created the mess, surely we can rest knowing He isn't holding our mistakes against us. That He is accepting of us at all times. That He remains faithful, even when we are faithless.

Understand clearly, we as believers shouldn't pursue sin, or accept poor choices and just make excuses such as this is just the way I am. We shouldn't allow the spirit of the present age or Worldly trends to mold us or shape our thinking. Now as we make that clear, what about when we do sin? Should we be afflicted with overwhelming guilt in our thought life?

Guilt comes with its accusing voice saying, "you've really blown it this time.""God could never use you again.""God surely won't answer that prayer." "You've let God down." Or the worst of all, "You're filthy, you're dirty, you're a failure, you have no place in God's kingdom, the plans He has for you are thwarted and nullified, and you did it!"

I have great Grace, good news. You can't ever let God down, you're not holding Him up. When you received Jesus, He judged you not guilty. He declares you're the righteousness of God in Christ. You've not just been declared righteous because of Him taking your place, but because of the blood and the New Creation, you are actually made righteous!

In summation, should we as believers accept guilt? Absolutely not! If we sin, we feel regret and also a realization of our newness in Christ. With the love of God having been shed abroad in our hearts, we can't take pleasure in doing wrong to others, even indirectly. This is the regret I am referring to, the change of mind saying I shouldn't have done that, that wasn't walking in the love of God. The Spirit convicts us of our righteous new nature and we again realize this behavior isn't who we are. We should never let our behavior determine who we are. Our identity in Him will eventually determine our behavior when we accept and identify with who He made us in Christ.
Image courtesy of iosphere at FreeDigitalPhotos.net
Posted by John W Reed at 03:02


I used to be able to find good info from your content. all of craigslist

Melony so what portion of this article are you in disagreement specifically or is this merely a spam comment intended to get people click ok a Craig list advert?