Is the Church still under the Mosaic Law? 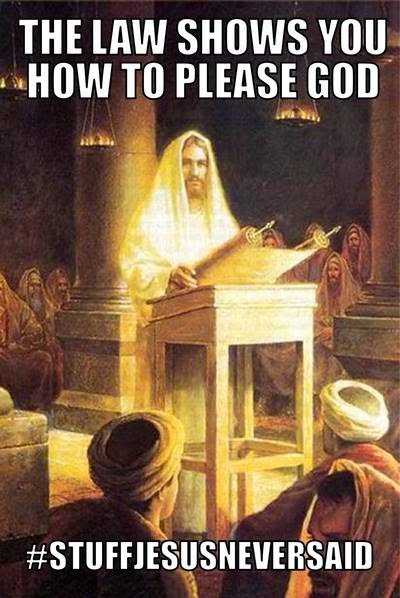 17 For the law was given through Moses, but grace and truth came through Jesus Christ. John 1:17

I'm beginning a new series of study concerning the Law of Moses. I  am going to fully answer the question "Is the Church under the Mosaic Law?" Is the Church under any portion of the Law today? I believe the Word of God is quite clear on this issue. The New Testament Church of Jesus Christ is not under the Mosaic Law. We will allow the Word to settle this matter as this series progresses.

I also want to answer questions like does the Law show us what is sinful today? Does the Law perfect or mature us? Is grace given to us in the New Covenant to simply empower us to fulfill the duties and requirements of the Law? Are grace and Law ever to be mixed?

First, how did we get here? How did we as New Covenant Christians get to the place where we even have to ask questions about our relationship to the Mosaic Law? I believe there are several reasons. Lets begin to look at them.

The flesh loves to boast (Ephesians 2:9).  The Law is a covenant of works. It is you doing something and then God will respond. In simplicity it is do good, get good. Do bad, get bad. The main problem with the Law was mankind couldn't consistently do good. We were weak in our abilities. The Law is good and perfect but we aren't in ourselves.

Today, many religious tradition minded believers look to portions of the Law that they are comfortable with. The commands and traditions and customs they can give an appearance of adherence to.   This is so they can exalt themselves in the eyes of men. They can point to their actions as being more committed than others. This also gives them the ability to point fingers at others failures and have a sense of deeper commitment because they aren't involved in those kind of activities. It gives them a place to boast at the expense of others.

Dabbling in a diluted form of dual Covenant theology

Many Christian groups are flirting with a modified concept of Dual Covenants. Dual Covenant theology in its most basic form is the idea that the Gentile World come to God by Jesus Christ. Whereas the Jews are able to gain eternal life by continuing in the Law of Moses.

There seems to be an exaltation of Jewish mannerisms and customs and Old Covenant observances of feasts and worship styles in some Christian circles. (Now to clarify this is not an anti-Jewish rant or anti-Semitic stance. We love the Nation of Israel. We bless the Jewish people. We believe that land is theirs. God gave it to them. It was a promise to Abraham and his seed. It's just that this is not a Covenant made for us but for them at that time.) This mindset has caused some to believe we should still celebrate the feasts. That we should conduct worship services with Old Covenant practice. Hence, we are still under portions of the Law.

To balance or counter error

The final reason I've seen why Christians feel we are still under Mosaic Law is this concept of correcting error. In this beautiful gospel of grace (which is the gospel, there is no other gospel), some have altered or abused the good news. Some have fallen in a ditch of poor choice making. Some have tried to justify their sinful living by God's forever forgiveness and righteousness.
11 For the grace of God that brings salvation has appeared to all men, 12 teaching us that, denying ungodliness and worldly lusts, we should live soberly, righteously, and godly in the present age, Titus 2:11-12
Grace awakening isn't about living in sin. Let me give you four reasons why we shouldn't pursue a sinful lifestyle.
1. Sin has consequences. Naturally, it can cost you finances, peace, and even your freedom. Spiritually, it corrupts our thinking and we can miss what God is trying to reveal to us by His Spirit.
2. Sin won't send you to Hell, but your actions and poor witness may turn someone else off of the gospel of grace. We are His ambassadors. We should be good witnesses before men.
3. Sin weakens our confidence before God. God isn't turning from us. God isn't disappointed in us but, our memory reminds us of our error and fault. We tend to run from Him not to Him.
4. Sin can put you in bondage to a habit or behavior. God paid to make us free. He doesn't want anything exercising dominion over us.

Some ministers see the errors in the lives of some grace believers and because of this seek to use the Law to balance out the message. They feel we can use the "moral" portions of the Law to correct behavior. So we are still under some of the Law in their view.


Rightly dividing the Word of God


These are the reasons I have seen for this sudden return to the Old Covenant in the Church. If we would let the Word of God be the final authority we wouldn't have this mixture of Covenants. I have seen, especially in the Charismatic and Word of Faith circles, the error of exalting men over the Word.

Because preacher so and so or minister what's his name is so honorable surely he couldn't miss it. He would never say anything wrong. I have seen believers blindly following a teaching or concept just because they respected a certain minister. Could his/her teaching be substantiated by two or three New Covenant Scriptures? It didn't matter. So and so had an experience, a dream a vision or "word".

The Word of God is priceless. It's the solid rock and foundation where we get the truth from. I have seen bandwagons and faddish trends in Christians circles all my life. Spiritual warfare marches, Bible prophecy ideas like Bible Codes. Following astronomical events like "Blood Moons" and this idea of going backwards into Mosaic Law. All of these have mass followers because they follow some minister and not the Word of God as the final source of truth and authority.

This is just the beginning of this series of study. I wanted a good understanding of why some even believe we are under the Law. I trust the study blessed you. Thanks for taking the time to read the Blog. Remember, follow the Word of God. Search the Word of God. Don't believe a concept or teaching just because I said it or somebody else did. Let me give you a brief example.

I used to believe and proclaim this "hundredfold" return on your financial giving. I only believed this because several ministers I knew and loved taught it to me on their TV shows and books and tapes. I even met some of these ministers. Surely, they couldn't be wrong. Years later after carefully studying and rightly dividing the Word of God I recognized what they were teaching was mistaken. They hadn't used Scriptures in their context and had very poor exegesis in their use of the Word to convey their idea. In the same way don't allow some minister to lead you astray by telling you that you're still under the Law or any portion of it.