Grace vs Law: Lazarus raised from the dead. 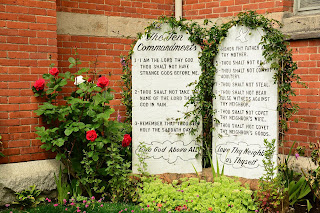 We've been in a series contrasting Grace versus Law. We've seen how the Gospels have hidden gems revealing just how Jesus came to fulfill the Law, bring an end to the Old, and usher in the New Covenant and Grace. Jesus' life represents God's heart to mankind.

In John's Gospel, we see the power of God on display for all to see. Jesus raised Lazarus from the dead. John 11 details this wonderful miracle of God's Love and Goodness. Looking closer we can see once again how Jesus reveals His work of Grace and completion of the Old Covenant and the Law.

To begin with many have questioned and come up with traditional answers to explain why Jesus waited four days before He came to Bethany. God wasn't delaying His coming to create some new theology where God delays intervening in His children's lives to teach them patience, or to create catchy phrases like "delayed, not denied", so preachers can elicit an emotional response from their audience. He didn't wait four days to prove some type of sovereignty principle, that He alone is God and can do whatever He wants.

Now don't get goofy, Jesus wasn't implying that sickness and disease bring God glory. Don't adopt some man-made theology, some ridiculous concept, that leads one to speak out thankfulness that they or a loved one is sick or diagnosed with a disease. Jesus was speaking the end from the beginning, He was speaking Faith. He was speaking forth the end result of the situation. Jesus knew He'd raise Lazarus from the dead.

With that understanding, we can see that Jesus took an opportunity to not only bring about a miracle to demonstrate God's Goodness, and Love but also to give mankind an illustration of His full redemptive work. He remained for four days as the first picture of redemption. Mankind at this time had been spiritually dead for four thousand years from the time of Adam to this point.

Peter reveals a thousand years is as a day with the Lord. Mankind had been dead for 4,000 years, but what about what Paul said in Romans 5:13? Paul was speaking of how God dealt with man through these years, but mankind was spiritually dead for 4,000 years but didn't know it. The Law came to reveal to man his sinfulness and separation, and need for a Savior. Jesus waiting four days was a type of His appearing after 4,000 years.

When Jesus came to Bethany, He declared to Lazarus' sisters that He was the Resurrection and the Life. He went to the tomb and instructed them to roll away the stone. Then He called Lazarus forth from the dead. A miracle of the dead being raised was seen by all.

Too often we stop there. We aren't seeing what God is revealing. Jesus came after 4,000 years of spiritual death to roll away the stone of the Law. The Law kept man entombed in spiritual death.

22 But the Scripture has confined all things under sin, that the promise through faith in Jesus Christ might be given to those who believe. 23 But before faith came, we were imprisoned under the law, kept for the faith which was later to be revealed. 24 So the law was our tutor to bring us to Christ, that we might be justified by faith. 25 But now that faith has come, we are no longer under a tutor. Galatians 3:22-25 MEV

The stone being rolled away from Lazarus' tomb was a picture of Jesus removing the Law and bringing forth a new and living way to approach God. Jesus called him out of death unto life. He commanded those old grave clothes to be removed. We who believed must remove the old grave clothes of dead religious works, trying to earn God's Love, trying to gain favor through performance, and seeking to warrant the blessings of God by spiritual disciplines or actions. Jesus wants us to rest in His Righteousness not our works.

The stone is a perfect representation of the Law. Look at the words Paul used to describe the Ten Commandments and the entire Old Covenant, and all the 613 commands of the Law in general.

The ministry of Law is a ministry of death and condemnation. Yet in so many churches and ministries throughout the world pastors and leaders cite the principles and statutes of the Law as the way to come before God. As the means by which we receive answered prayers, healing, provision, protection, and wholeness.

They look at Deuteronomy as a guide for New Covenant Christians to receive abundance and blessings. If you diligently hearken to God. If you obey all His statutes you'll be blessed, if not you're cursed. Want healing in your body? They point you to Exodus, heed the voice of God, do what is right in His sight, and keep all His statutes, then you will be healed.

You can readily see under Law, that receiving from God is all contingent upon your doing, your hearkening, your diligence, your observance, and your obedience. Where is Jesus in all this? Where is the Finished Work of Jesus? Where is His sacrifice? It's not the focus.

Jesus rolled away the stone of Law. He called us out of the tomb of death and condemnation. Let us not go back to the tomb and roll the stone of Law back and imprison ourselves to our works and performance.

In summation, Jesus came to fulfill the Law and complete the Old. The New has come. Jesus' perfect Finished Work has provided a new and living way. Let's embrace the New and no longer cling to the Old. Jesus provided a better way. Let's exalt and honor His Finished Work and New Covenant. Our freedom, our wholeness, and our everlasting joy are found only in the new and living way of Grace and Righteousness. It is glorious!

Image by Jondolar Schnurr from Pixabay
Posted by John W Reed at 13:40