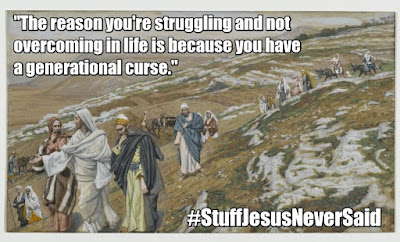 keeping mercy for thousands, forgiving iniquity and transgression and sin, by no means clearing the guilty, visiting the iniquity of the fathers upon the children and the children’s children to the third and the fourth generation.” Exodus 34:7 NKJV

Are you struggling with sin? Are you not walking in victory in some area of your life? Are you experiencing setbacks and discouragement over and over? Are you suffering through a tragic loss? Then you may have a generational curse that needs to be broken.

What exactly is a generational curse? I am not really 100% sure myself but apparently if your great grandparents sinned, then you are also suffering for their deeds. Also apparently receiving the free gift of Grace, trusting in Christ alone, is not enough to be free.

Although I am being a little tongue in cheek, this idea of curses is a serious one that has held many Christians in bondage. Is the reason they are experiencing hard times because of a generational curse? Sadly, some teach this and some believe it.

Several years ago, my family experienced a tragic loss, my child was lost in the womb. When I went to church, a sincere and well-meaning but highly misinformed woman came to me and said perhaps the baby was lost because there was a generational curse involved. Not the most encouraging thing to hear, but I responded with Grace and walked away. This is the fruit of this teaching.

Let me be clear, the concept of generational curses is a mistaken idea that has no basis in the New Covenant. Our text reveals what people call a generational curse. Yet they fail to keep it in context and to who the audience addressed was.

This concept was introduced during the exodus from Egypt to the promised land. This was to be the punishment for the sin of idolatry. This of course was before Christ came and paid the price for mankind. What is most interesting is the proponents of this mistaken idea also exclude God's clear words to the nation of Israel by the Prophet Ezekial.

God already ceased from the generational cursing business before the cross. He clearly says God holds the person accountable for their sins, not their children. God is a personal God, not a distant deity. He is not unjust.

The real issue with the notion of "generational curses" is that it diminishes the work of Christ on the Cross. This concept says Jesus' Finished Work is insufficient. That Christ's shed blood is weak and not powerful enough to cleanse us from all sin and its effects. That Jesus' redemptive work at Calvary was unable to completely redeem us from any and all curses. That the New Creation is an incomplete work and we need something additional to be completely free.

Some would say, ok maybe for Christians but come on, sinners, those without Christ surely have curses in their life. Have you not read where John says Christ is the propitiation for the sins of the whole world? Even the lost are not punished with curses. Of course, the lost experience consequences for sins and don't have peace in their life until they receive Jesus' free gift but these aren't curses from God.

The reason Christians can accept notions like "generational curses" is because they are uninformed and misinformed about the cross. They really don't understand what transpired on that tree. At the cross, Christ exchanged our old sinful nature with His perfect nature, we are partakers of His divine nature. Christ exchanged our unrighteousness for His perfect Righteousness. Christ perfectly redeemed us from the curse. He became something He never was, so we could become something we've never been.

He cleansed us, healed us, redeemed us, forgave us, and made it possible for whosoever will to become a child of God. The reality of the New Creation destroys the concept of generational curses. In Christ, all things are made new and all of the old is passed. Not just a part but all.

In summation, reject any teaching or doctrine that tries to diminish the work of Jesus. That teaches there are additional steps you must take after accepting Jesus in order to find freedom and victory. The Cross was enough!