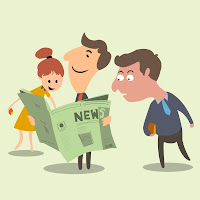 It's the beginning of a new year. At this time we often we look back at the previous year and reflect and remember significant events. In 2017 one phrase that was oft in media outlets was the phrase "fake news". When it comes to hearing the good news of the Grace of God, sadly religion and tradition usually spread more fake news than good news. I sensed the inspiration of the Spirit to begin a study distinguishing between the good news and fake news.

Whenever we shine the light of truth on traditional religious strongholds we must proceed with caution. We can be easily enticed to get in the flesh, or the old way of thinking. To be resentful or get angry at traditional religious leaders who conceal the truth of God's overflowing goodness to all. This should never be our motive in distinguishing between tradition and truth. I can freely admit I have gotten into angry fits and allowed my flesh to dictate my reactions to religious traditions. Thank God for Grace and mercy.

Are you better in Grace? Do you have a better understanding of whose you are? Of who He has made you in Christ? Of your right standing before Him? Of just how forgiven you are? Of how much you're accepted, favored and loved by Him? Of how secure your salvation truly is in Christ? Better at showing love because you've received His everlasting love?
Or are you bitter? Bitter because of what religious tradition taught you? Bitter at denominational Christians and leaders? Bitter at those who resist the truths of the Gospel of Grace? Bitter at churches, preachers, Bible Colleges, and Seminaries?  Are you bitter and seek to antagonize, annoy, aggravate, provoke, irritate and rile "traditional Christianity" by your attitudes, your social media posts, blog posts, or interactions with other believers?

I've seen situations where bitter believers share provocative and antagonistic statements questioning traditionally held theological views on Social media. In reality, many are simply seeking to aggravate and goad others to dispute their view and "revelation". When their newfound "revelation" is challenged and not accepted, they take this as an opportunity to claim some form of persecution and "attack" on them. If their "revelation" is challenged in light of the Scriptures, they label those who disagree with them as just being prideful and arrogant. Sadly, some aren't sincerely embracing the Gospel of Grace, but are rather clinging to bitterness and resentment and anything that opposes and irritates religious Christians. When bitterness is the true root and motive for your actions, the only "fruit" you will manifest is strife, disputing, and quarreling.

Let love be our guide and instructor. Jesus is the love of God manifested. Jesus, God in the flesh, displayed the love of God and revealed to us the goodness of the Father. It was Him who pointed out that that tradition negates the Word in people's lives. Jesus the person of Grace distinguished between truth and tradition. This proves we can distinguish and discern truth and tradition in a loving manner.

Here is one thing to remember. When we shine the light of the Gospel of Grace on the fake news, traditions of men we are not attacking people. We are distinguishing the truth and removing the false. People are not our enemy. The enemy and his spirits of error and deception are our true enemy. Even though religious preachers oppose the truths of unconditional eternal security, the forgiveness of all our sins, that God is not mad at us or ever disappointed in us, that we are the righteousness of God in Him despite our performance, that doesn't mean we have to oppose them and count them as our enemy. We are one family. We are the Church. We are the Body of Christ. There is no Charismatic Heaven. No Word of Faith Heaven. No Hyper-Grace Heaven. No Baptist, Pentecostal, Lutheran Heaven. There is only Heaven where the Body of Christ will be together, without divisions!

That said, and with our motives clear, how then do we discern between fake news and the Good news? What is the key to see the truth and reject tradition? How do we know we are hearing the truth?

This isn't a formula or anything but we need to take a few steps to be able to successfully discern between truth and tradition. First, we must make the Word the final authority. Not what Grandma taught us as a child. Not what the denominational leaders claim. If the preacher and Grandma agree with God's Word fine, but if it differs then simply disregard it.

I recall a time years ago when I shared with a brother about the benefits of praying in tongues. He said his Grandma taught him to steer clear of that tongues stuff. That it was demonic and not for today. I then showed him Mark 16. When he saw what Jesus said, his eyes were opened and he accepted Jesus words over his Grandma's.

After establishing within yourself that God's Word is the final authority, you must then rightly divide the Word. You have to keep the Scriptures in context. Any text taken out of context leaves you with a con. The extremes of the prosperity gospel came about because men took the Scriptures out of their settings and context and assigned their own interpretation to them.

When you rightly divide the Word, you also have to determine which Covenant the passages are in. In other words, are the passages teaching concepts from the Old Covenant or from the New? Under the Old, you had to forgive to be forgiven. In the New Covenant, you forgive because you've already been forgiven.

Finally, after making the Word the final authority and rightly dividing it, you have to look at the character of God. God is a good God. You can see that throughout the Old and New. So would God be sending storms and misery? Would God be punishing you for your sins by making you have "bad days" when Jesus already took the punishment for your sins? Is God the author of disease, death, and destruction? Clearly no because we see the character of God in the Scriptures.

In summation, we should discern the truth over the traditions of men with the motive of love in our hearts. We love all our brothers and sisters and want to see them all freed from the shackles of religion. With the keys to understanding how to determine if we are hearing the truth or mere tradition, we can now find freedom in our lives and lovingly share this with others.
Image courtesy of jesadaphorn at FreeDigitalPhotos.net
Posted by John W Reed at 08:42

I don’t disagree with this commentary; however, to pretend that Jesus didn’t oppose (or was bitter against) religious leaders during His ministry on earth is disingenuous. He even called them names.

"however, to pretend that Jesus didn’t oppose (or was bitter against) religious leaders during His ministry on earth is disingenuous. He even called them names."
On Earth, Jesus never sinned. A root of bitterness shows a lack of love and therefore a root of sin. Read Hebrews 12. A root of bitterness leads to defilement. So if Jesus had bitterness at religious leaders He would, in fact, have a root of sin and therefore He couldn't be the Perfect Lamb slain for all sins.
Your words locate you, Boyd. It seems your still in an area of anger and resentment towards religious tradition. Jesus called out self-righteous leaders for their hypocrisy. He was angered by their actions that would try to block the love of God manifesting. However, you forget Jesus is the person of Grace. It seems Grace folk are only gracious to those whom they agree with. It seems love and mercy and goodness is only for the sinner, the one addicted to porn, the prostitute, the fornicator, and adulterer. The religious leaders who differ from Grace teaching are to be shunned, reviled, to be objects of condemnation and bitter rants. Wasn't it Jesus Himself, who said when reviled not to revile back? DIdn't Jesus say love your neighbor? You forget Jesus also took a whip and drove out corrupt business types who were the money changers from the Temple. They weren't religious leaders. They weren't Pharisees or Sadducees. They were cheating God's people so He was angered. The reality is God can sometimes find fault by our thinking and actions but doesn't mean He is bitter or doesn't love them.
Please relinquish your hurts and bitterness and receive the Grace the heals and restores.