Good News Vs Fake News: The Gospel of Grace is a counterfeit dangerous message? 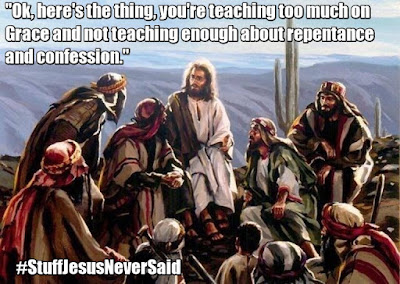 We've begun a new study distinguishing between the good news and the "fake news" of tradition. We've established that when highlighting the differences between truth and tradition we aren't attacking people. We wrestle not against flesh and blood but rather the deceptive spirits leading people astray. People aren't our enemy.

Whenever the Church begins hearing a revelation of God's goodness and great love and mercy, tradition is quick to try and extinguish the flames of revival. In the 1940s and 50s, one minister began to boldly proclaim that God is a good God. You can't imagine the controversy this created.

People would tell ministers and fellow believers they didn't like it when this minister said this. Their reasoning? "people would get the wrong idea about God." Religion and tradition fear when the people know more about their Father. Perhaps this is because their controlling grip of fear will loosen on the minds of the people when they better know their Father.

Tradition resisted the Charismatic move, surely God can't move by His Spirit today and certainly couldn't bestow a personal prayer language to His kids. They fought hard against the move of Faith. Surely people couldn't simply take God at His Word. Surely God Would never answer the believing prayers of His people.

Today, God is doing it again, restoring the true Gospel to the Church. He wants to reach the World. Now we see religious tradition in a panic and doing all they can to resist this move. To them, Grace is an end-time deception that is leading that captive in its grip down the road to eternal damnation.

Some are even going so far to call this the great crisis of our time. That the Grace awakening is a mere distortion of the Gospel. That Grace does away with holiness, obedience, and repentance. They say Grace is producing and promoting lust driven immoral, remorseless living.

The True Crisis of Our Time

The true crisis of our time is the fact that religious tradition has abandoned and forsaken the original Gospel. They've replaced it with a gospel of mixture. They've embraced a gospel of works and performance. They add our efforts and performance to the simple Gospel of salvation by Grace alone through faith alone.

6 I am shocked over how quickly you have deserted the grace gospel and strayed away from Christ who called you to Himself by His loving mercy. I’m frankly astounded that you now embrace a distorted gospel of salvation by works! 7 That is a fake “gospel” that is simply not true! There is only one gospel— the grace gospel! Yet you have allowed those who mingle law with Christ’s grace to confuse you with lies. Galatians 1:6-7 Passion Translation (first edition)

Paul rightly exposes what is the true crisis. The changing of the Gospel from the Gospel of Grace to the gospel of works and efforts. Tradition can't seem to accept the concept that salvation is begun by Grace and completed through Grace.

To them, once salvation is received, Grace's job is done so to speak. Now that you've been counted worthy to receive salvation, you need to get busy earning it and proving you were worth it. In essence, tradition's gospel message is God starts it with Grace and you finish it or bring it to completion by your performance.

The only time Grace is referred to is when they define Grace as some empowerment concept. In other words, God still has portions of the Mosaic Law that need to be observed, but don't fret He gives us the Grace to accomplish this task. If people don't walk this moral observance out? Either they were never saved, they are in rebellion or are just not "tapping" into this available Grace.

The traditional gospel starts with God's Grace. It begins with people sharing how much He loves and accepts you just as you are. Once you accept Him in your life then the message changes. Belief and acceptance are replaced with requirements and expectations. This is why so many find the Christian life to be too hard.

Salvation is received by Grace through Faith. It is all a work of God. You simply take Him at His word and put your trust in Him. Once you have sincerely done this you are saved and nothing can alter this. Your performance, your steadfastness, your belief, your choices can never undo what God has done. Jesus is forever married to the Church and He never seeks a separation, an annulment or divorce.

Tradition can't accept this because they are so desperate to contribute to their salvation. When they get to Heaven, I half suspect they will be looking for Jesus to hear Him say, "Thanks for helping me save you. I couldn't have done it without you!"

Is Grace a dangerous message? Is the Grace awakening the crisis of our time? Absolutely not! Grace is the Gospel, not a message. Grace is the unearned, undeserved, unmerited favor of Almighty God. This favor received in and upon our lives will produce an empowerment to walk in victory. However, this victory is accomplished in different stages in every believer's life.

God sees the end from the beginning. He already knew you would be struggling with pride or anger throughout your lifetime. He has already seen how much you struggle with that sin or addiction. He still chose to save you and enter into an everlasting relationship with you. He will always encourage us and love us pointing us in the right direction. Sometimes we will follow Him and sometimes we fail. The good news He is still there and He isn't angry. He is their beaming with pride, looking at His child, flaws and imperfections and all because His love for you is eternal and unconditional.

Yes, God desires us to lead lives of moral excellence but He isn't holding our sins and flaws against us. He isn't walking away from us when we fail. He isn't demanding results or we are "fired." We need to have this truth established in our hearts and minds so we can fully benefit from a loving relationship that will be fruitful. This is the Gospel and Good news!
Posted by John W Reed at 12:48