Secure in Grace: Saved by Grace Through Faith and Our Endurance? 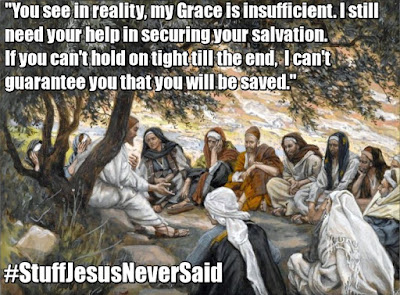 Sensing the strong leading of His Spirit we're continuing in our study of our security in Grace. My prayer and hope for so many are that they'd see the vital importance of the eternal security of the believer. For certain though this is an extremely controversial topic.

I've received much positive feedback from this series. Still, others have not responded with enthusiasm. Some vehemently reject the notion of an eternally secure salvation in Christ. Why is this?

I believe one major obstacle Christians need to overcome is the rightly dividing of the Word of God. When we rightly divide the Word, we aren't just referencing distinguishing between Law and Grace or the Old and New Covenant. We are also referencing what is being said in context, to whom is the speaker addressing, and discerning the many admonitions and warnings given in Scripture.

You see to the immature mind, Scripture seems only to point towards a Heaven to gain and a Hell to shun. They don't see the Scriptures admonishing believers to mature and walk out practically what has already occurred inwardly. If they see a warning or admonition it can only mean one thing, you better straighten up or you're out.

For instance, Paul admonished us not to live sinfully in various places. John warns against association with false teachers. Peter warns about following false teachers. Study these admonitions and warnings in context.

You'll find Paul's admonishment against sinful living was because it's contrary to our new nature, who's we are, and the fact that God desires that we not be entangled in bondage to anything. John's warning is to keep us from being deceived and led astray. Peter's admonition serves to warn us that if we follow after false teachers our lives will be worse off then before we got saved.

None of these warnings and admonitions have anything to do with a loss of salvation. Hold it brother, didn't Paul say many will depart from the faith? Didn't he state he kept his body under severe discipline lest after he preached to others he would be a castaway or one who is lost?

Glad you mentioned that. In 1 Timothy 4 Paul does say some will depart from the faith. I acknowledge that this is referencing believers. Does this passage suggest though a loss of salvation? Again, rightly divide the warning. To depart means you're going somewhere. In context, Paul is referencing believers who depart truth and embrace error. Some believers have embraced erroneous theology or ideas and practices. Take note this passage mentions dietary rules. One can easily see Paul is saying some are rejecting a righteousness by faith and embracing a righteousness established by works and religious practices.

As for being a castaway, Paul in 1 Corinthians 9 mentions physical discipline. Was he saying I better be perfect because I share the Gospel? Because if not I will forfeit my salvation? Again not every admonition is about Heaven and Hell. He was simply stating because I share the Gospel I want to be an effective witness and not be a stumbling block by living foolishly or immorally.

I really sensed the need to establish the truth about how to rightly divide the Word in order to bring clarity to the conditional salvation so many cling to. Some Christians object to eternal security and instead prefer a conditions-based, hope so salvation. They see passages referencing overcoming, enduring, continue in, holding fast and attribute to them conditions to maintain and retain one's salvation. Or they conjure up the concept that endurance to the end proves one was really saved. This is God starting salvation but us perfecting it by our persevering rather than God and His Grace preserving us till the end.

Hebrews 3, Revelation 2, Matthew 10 and Matthew 24 all reference holding fast, overcoming or enduring. The traditional view of these passages has birthed two confusions in the minds of believers as I just referenced. Salvation is conditional, either overcome and endure or you're lost. (A variation of this is that sinning too much hardens your heart and will cause you to loosen your grip and you will be lost.) The second as mentioned before, us persevering to the end to prove we were truly saved. These two ideas are erroneous because they leave the believer fearing loss and never fully assured of their salvation. In essence, they both promote an eternal insecurity.

Allow me to briefly bring light to these passages. To properly understand them context and who is being addressed is key. When Jesus spoke of enduring to the end to be saved, He was referencing the persecution believers would face and the calamities and opposition to come to the Nation of Israel at a future date. The salvation He spoke of was physical deliverance, not eternal salvation. Hebrews was admonishing the unbelieving Jews who heard the true Gospel hold fast to that truth and act on it. For those who've received the Gospel hold fast because Jesus has already procured triumphant victory and you won't experience the benefits if you aren't resting in Christ alone.

In the book of Revelation Jesus speaks of overcoming. Some see Him also warning of removing lampstands and fear this is talking about a loss of salvation. Nothing can be further from the truth. The lampstand reference is talking about a church's influence, not their eternal salvation. As for overcoming to receive life and not having our names blotted out of the book of life, John already gave us the insight to what overcoming really means and who these overcomers are. John said in his epistle that the overcomer is the one who believes in Jesus.

So is our salvation by Grace through faith and our endurance, overcoming or holding fast? No! If so then eternal life isn't eternal but temporal. You're saved so long as you remain enduring. Religion likes to put the focus on self and human abilities. It seemingly seeks for a "look at me Jesus, I helped sustain my salvation" "award, ribbon or trophy" when they get to Heaven. This is why they can't seem to grasp the New Covenant. They keep trying to add self, conduct, ability to endure, hold fast or continue to the New Covenant. This is why God found fault with the first Covenant. Mankind was never able to fulfill their part.

In this New Covenant, we don't have a part to play. Jesus played our part already. The Covenant was cut and sealed between the Father and the Son. Our only "work" is simply to believe. To better understand our eternal salvation, we need to look to the Scriptures that specifically address our salvation.
28 And I give them eternal life, and they shall never perish; neither shall anyone snatch them out of My hand. 29 My Father, who has given them to Me, is greater than all; and no one is able to snatch them out of My Father’s hand. 30 I and My Father are one.”  John 10:28-30 NKJV
This is clear, it is not obscure. We who've received Christ are forever secure in our Father's hands.

So in summation, is salvation conditional? Is it obtained, maintained and retained by our endurance? By our continuing? By our holding on tight? No! It is clear Jesus and our good Father is holding onto us and they have sworn they will never let go. Salvation is by Grace alone through faith alone in Christ alone. It is not Grace plus our works or self-efforts or behavior or performance or steadfastness. Rest and stay in peace we are forever in Grace's secure grip.
Posted by John W Reed at 08:49