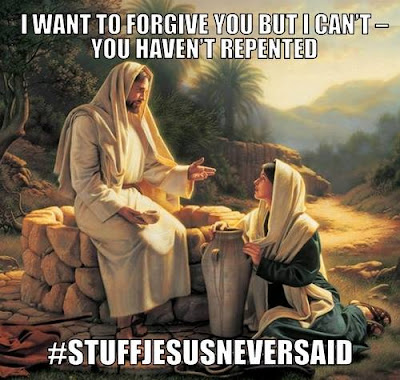 We have been in an extended study concerning God's amazing, over the top Grace. We've been allaying the many myths associated with the message of Grace as of late. Radical Grace isn't the message that celebrates sin and lasciviousness. It isn't a message of inaction and passivity. Grace once received, produces empowerment and brings greater understanding of who we are because of Christ.

Whenever truth comes it lays aside the traditions of men. When tradition is laid aside some men fight to keep their traditions on the forefront if you will. In order to better understand where I am coming from let's define what repentance is not.


Repentance is NOT you telling the Lord I'm sorry

This mindset perhaps is rooted in the misapplied and misunderstood Scripture 1 John 1:9.
9 If we confess our sins, He is faithful and just to forgive us our sins and to cleanse us from all unrighteousness. 1 John 1:9 NKJV
This passage is written to the human who is a sin denier. Those who have refused the free gift because they don't believe sin exists. Or they feel their works and intellect is more than enough to stand before God. Some, however, have turned this passage into the Christian's bar of soap when they blow it.

Because of this, many feel that confessing and repentance are equal parts or two sides of the same coin. They then see repentance as some apology principle. That God withholds forgiveness until we feel bad and receives an apology. This concept is rooted in error and wrong thinking.

Jesus has forgiven us on that Cross. He took our past and present and future sins and paid for them in His Finished Work. We are perfectly forgiven. Now, if it helps one to receive of the Finished Work to ask for forgiveness when they miss it, by all means ask away. You don't need to though because having received Jesus also means we received all He purchased for us in His great work of redemption.


Repentance is NOT turning from sin

This is where the dictionary and Latin definition of the word repent get people caught up. So many seem to define repent as a turning away from something. Some have gone so far as to rip the assurance and security the Finished Work purchased for the believer by wielding this definition.

Some teach that if you blow it or mess up and ask God for forgiveness, but continually repeat the same mistake, you haven't really repented. You must turn from that sin and not commit it again. Only then will God actually forgive you. I have heard this concept taught in many holiness circles.

To repent is to change one's mind. This is the Bible definition of the word repent. So, Radical Grace isn't opposed to the changing of the mind. We all had a change of mind when we received the good news of the Finished Work and Grace. We changed our mind from trusting in our performance and began trusting in Christ's Finished Work.