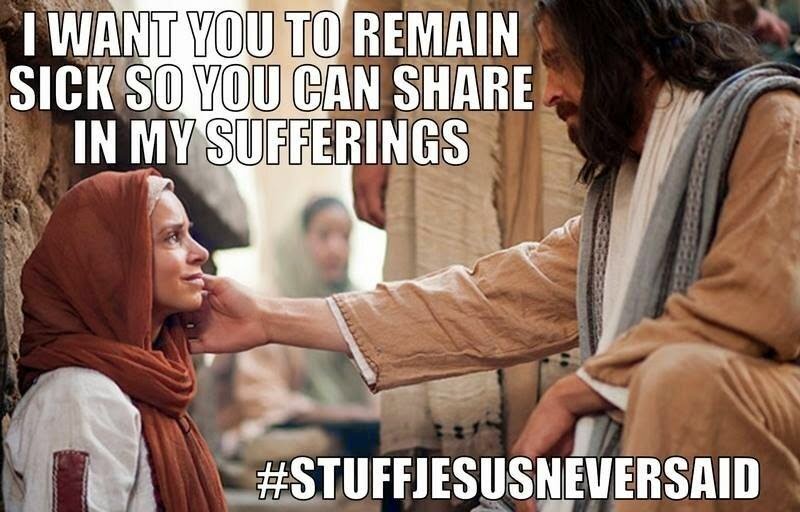 who Himself bore our sins in His own body on the tree, that we, having died to sins, might live for righteousness by whose stripes you were healed.  1 Peter 2:24

In my last article I posed the question is God glorified when we are sick and diseased? To ask it another way, does God get glory when we are sick? I proved with Scripture that healing and wholeness is what truly brings glory to God.

Inevitably though, some will raise objections and point to John 9 and John 11. So I want to reflect on John 9 today and see if it in fact does teach that God sometimes is glorified when we are sick.

Now as Jesus passed by, He saw a man who was blind from birth.  And His disciples asked Him, saying, “Rabbi, who sinned, this man or his parents, that he was born blind?” Jesus answered, “Neither this man nor his parents sinned, but that the works of God should be revealed in him. I must work the works of Him who sent Me while it is day; the night is coming when no one can work. As long as I am in the world, I am the light of the world.” When He had said these things, He spat on the ground and made clay with the saliva; and He anointed the eyes of the blind man with the clay. And He said to him, “Go, wash in the pool of Siloam” (which is translated, Sent). So he went and washed, and came back seeing. John 9:1-7
This passage has been interpreted by many in religious traditional circles to mean God in His infinite "wisdom" and "sovereignty" caused this man to be born blind so that Jesus later in his life could walk by and heal him of blindness. Thus demonstrating to all His power, thereby proving He is the Messiah. The problem with this interpretation is it creates a very disturbing universe. Allow me to elaborate.
If this is the right interpretation of this passage this would mean anytime a disturbance, or distress in your life occurred it was God prearranging events. This would be so God could "show off" His "glory" through you to your unbelieving relatives and acquaintances when He delivered you. More clearly stated, God brings affliction or sickness upon you just to later deliver you. Is this the way God operates?
Think of this in the natural. What would we think of a Police force that went around hiring men of ill repute to burglarize or vandalize property? Then have those same Officers apprehend those they hired, to prove to the public how effective their crime reduction programs work? Sound absurd? Yet this is exactly what religious tradition teaches about God using this passage.
This interpretation has given much fodder for religious preachers to pass poetry and philosophy off as God's will. They emotionally stir up a crowd by saying whatever they are going through must be God working on them to "show them off" after He delivers them. They make statements like this.
"The same God that brought you in, is about ready to kick the door open and bring you out!"
Sounds poetic. It gets folk jumping and hollering aloud. The problem is it is not Bible. Notice they seem to add the words about ready. These afflictions God brings you is always about ready to end. This keeps folk in the pews, giving their offerings and waiting for their deliverance.
These are enticing words of men's wisdom is it is not God's will! If God who is the Alpha and Omega, the Almighty has to afflict you to show how great He is then I question how great He is. To make you sick just to heal you is quite a weak or poor display of power.
So lets get the accurate true interpretation of this passage. If you read the passage again it reveals something many don't take into account. Apparently, the Jews at this time believed a baby could sin in the womb. (It is interesting to note here that even Jesus followers didn't believe blindness was good.)
So the question asked was worded this way, who sinned, the parents or the man that made him to be born blind. This allows Jesus only three responses, the parents, the man or neither. So what do we see Jesus say in the passage? He responds with neither. He simply answered their question. He didn't give them a reason for this man's condition. It wasn't their concern. Jesus knew we live in a fallen World. That because of Adam's transgression sin is passed from one generation to the next. Sin itself is destructive and corrupt. That's why many children are born disabled, (not referencing a personal sin, but rather the sin of Adam).
So Jesus simply answered their question. Then He said but that the works of God should be manifest in Him I must work. Jesus was only saying because of this condition I must work the works of God which are healing and deliverance. The problem with many translations of this passage is in the punctuation. The punctuation isn't what is inspired it's the word's themselves. Is there a translation that fits this view I presented as truth? Yes, the Lamsa translation.

1 AND as Jesus passed by, he saw a man who was blind from his mother’s womb. 2 And his disciples asked him, saying, Teacher, who did sin, this man or his parents, that he was born blind? 3 Jesus said to them, Neither did he sin nor his parents. But that the works of God might be seen in him, 4 I must do the works of him who sent me, while it is day; the night comes when no man can work. 5 As long as I am in the world, I am the light of the world. 6 When he said these words, he spat on the ground and mixed clay with his saliva, and he placed it on the eves of the blind man. 7 Then he said to him, Go and wash in the baptismal pool of Shiloha. He went and washed, and he came seeing. John 9:1-7 Lamsa

See how punctuation changes things? This translation gets it right here I believe. So throw away those old sermons or turn off those preachers on TV saying whatever you're going through is God's doing and He is just getting ready to "show you off". Listen Jesus defeated the devil and finished the work at Calvary! He is showing us off when we receive all He has already accomplished. We show off God's goodness and grace because we know we don't deserve it and haven't earned it!
God is good all the time. He isn't afflicting you just to deliver or heal you to prove His power. That is tradition and not the truth of the Word. God already paid for our healing at the Cross. Thank God! I pray this article has blessed you. Thanks for reading. Consider passing this on to bless others with this truth.

When we start to see the scriptures through the eyes of Jesus, it really changes things, doesn't it? Great post John!

Thanks so much for the encouraging words Daveda.
It's all through Him and His giftings within me.