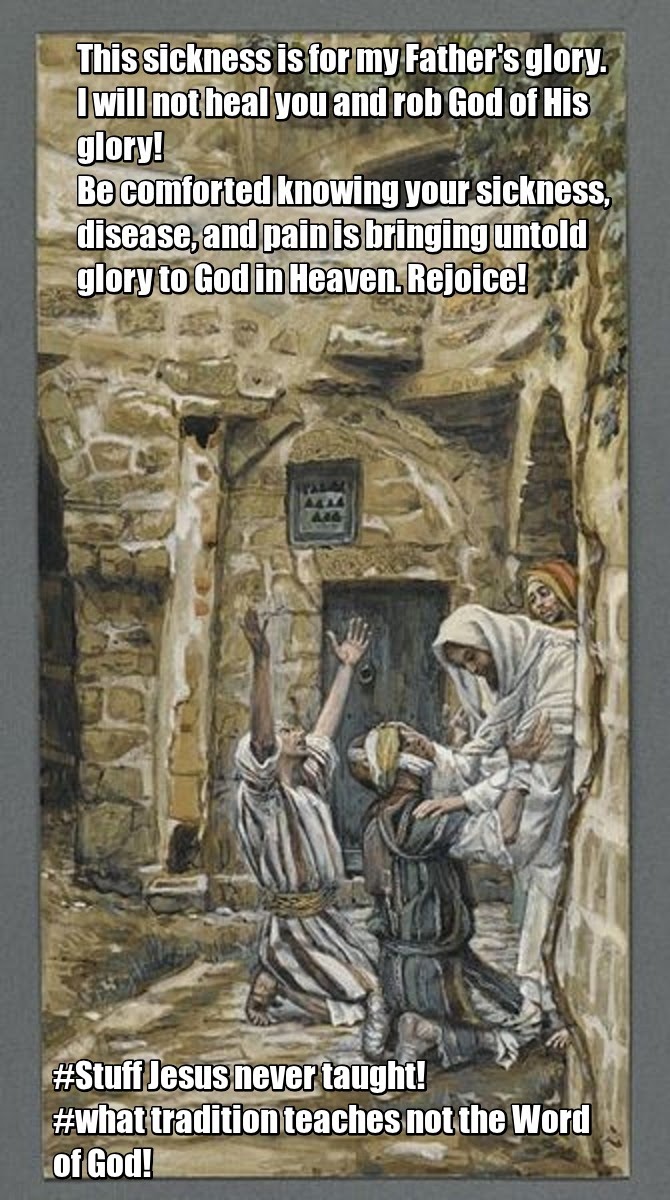 My beloved friend, I pray that everything is going well for you and that your body is as healthy as your soul is prosperous.  3 John 2

By rightly dividing the Word we can remove this obstacle. So today I wish to address the Scripture that many point to in endeavoring to establish their view that sickness brings God glory.


Therefore the sisters sent to Him, saying, “Lord, behold, he whom You love is sick.”When Jesus heard that, He said, “This sickness is not unto death, but for the glory of God, that the Son of God may be glorified through it.”            John 11:3-4
"You see brother? It's right there."
At face value I would have to agree that it seems to be teaching exactly that. The issue many fail to recognize is that this passage is being lifted out of its context. When we remove the text from its context all you have left is a con. If you try and teach a doctrine based on lifting this passage out of its context you are conning people.
Staying in context what can we see about the 4th verse? Jesus was trying to point to a truth that those present needed. Look again at the passage. Jesus stated this sickness is NOT unto death. Yet Lazarus did in fact die from his sickness. Is this a contradiction? Is the Word unreliable? What is actually happening here?
What did Jesus go about doing while He was here on Earth? He went about teaching. He saw Lazarus sickness as a teachable moment. This does not mean God brought the illness and death with the intent to teach. The enemy brought the sickness and death. God can utilize any situation good or bad to bring instruction. Again, God never brings hardship or pain or suffering to instruct His children. He can however, use a circumstance that already exists to instruct.
So what was Jesus endeavoring to instruct? Faith! He wanted to teach those around to trust God even when it seems impossible or the situation is dead. This also reveals that we can do nothing in and of ourselves. We must rely totally on Him and His power and performance.
So how was He teaching faith here? He was speaking the end from the beginning in this passage. That is why He could state the sickness was not unto death. Yes, Lazarus did die but Jesus knew in the end He would raise him up. So Jesus counted Lazarus healing and raising up from the dead as done. He spoke those things which be not as though they were.
Declaring the end from the beginning,And from ancient times things that are not yet done, Isaiah 46:10a
As it is written, I have made thee a father of many nations,) before him whom he believed, even God, who quickeneth the dead, and calleth those things which be not as though they were.  Romans 4:17
Understanding how faith is released through words brings clarity to Jesus words. Jesus was not saying the sickness was for God's glory. He was teaching that by faith in God the healing and miracle of the dead being raised would bring God high praise! He not only is the God that heals but the One that makes alive dead things!

What brought God glory then in this passage? Was it the sickness or the healing and raising up of Lazarus?
Then Jesus shouted, “Lazarus, come out!” And the dead man came out, his hands and feet bound in graveclothes, his face wrapped in a headcloth. Jesus told them, “Unwrap him and let him go!” Many of the people who were with Mary believed in Jesus when they saw this happen. John 11:43-45

Many believed in the Lord because they saw how good God is. No one was believing while Lazarus was sick or when he died. So healing and God's goodness is what brings glory to God. Does God get glory out of sickness? No, a thousand times no! God is good He gets glory out of your wholeness not brokenness and sickness.

I trust this post has blessed and encouraged you in your walk with the Lord. I pray the healing power of God to flow into every area of your life. In Jesus name, amen!

Absolutely, I agree! It is not the sickness that brings God glory it is His power to overcome it and declare victory.

I am with you, I don't believe for one second that God causes sickness or disease. we are His children and He loves us. His heart is ALWAYS to give never to take away. That would be like saying we want to make our own children sick to teach them something...that's ridiculous!

Amen Daveda God bless you and thanking God that you're healed. Again thanks for encouragement.