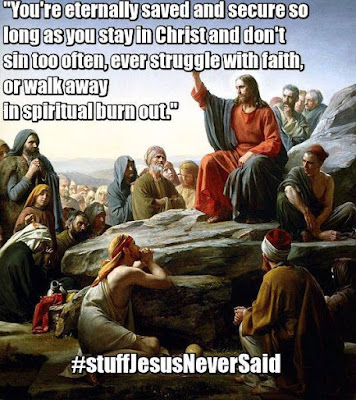 
Eternal security is a highly controversial topic in the Body of Christ. There exist believers that resist this wonderful good news of God's Grace. So how does one come to know and understand and receive this too good to be true but true good news?

I would like to briefly share with you, my own journey to understanding the Grace of God. When it comes to growing in our spiritual walk and the knowledge of our Lord and Savior Jesus, there exist times when only His intervention will bring about development in our spiritual understanding.

Plainly speaking, there exist truths of our redemption in Christ that our finite minds just cannot grasp. A great example of this is seen in Mark's Gospel where Jesus heals the leper. If you study this passage you notice a chain of events. The leper has a question. His faith and understanding of Christ couldn't move past that question mark. Jesus stretched forth His hand and touched him. Nothing happened. It was only after Jesus answered this question that the barrier was removed and the leper received his healing.

In our spiritual development in Christ, there exist questions. We have barriers that tradition and religion have infused into our thinking. We also have an observe and react theology. I will elaborate on this detail later.

For example, I couldn't seem to receive the redemptive truth that God is always good, and isn't the author of tragedies until I had the question, "what about Job?" answered. I had an observe and react theology. I observed people not receiving healing and reacted by not believing in His goodness. It was only when the Lord opened my understanding, to see from the Scriptures, that God didn't afflict Job that I could heartily embrace His all the time goodness.

The same is true of His Grace. I could readily see His Grace from the Word. I could hear it being taught from some ministries. Yet I knew, if I accept Grace it has to mean you have to receive the truth of eternal security. Grace and eternal security are inseparable truths. They are so obviously linked. Yet because of my Pentecostal/Charismatic tradition and my observe and react theology, I rejected Grace.

I'd observe believers who would attend worship on Sunday and on Monday they were out in public smoking a cigarette. I would then react saying to myself, "no way they are sincerely saved!" Of course, I was not tempted by tobacco nor was I addicted to nicotine. Such self-righteous arrogance on my part.

My journey took a right turn when I began listening to Pastor Joseph Prince many years ago. The truth of the Gospel was setting me free in my thinking. It was glorious until I discovered he taught once saved always saved. I was furious. I vowed to never listen to him again.

Father God has a good sense of humor and at my work site, there was a believer who knew the truth of eternal security. He challenged my faith and thinking. Finally, I repented or changed my mind. I discovered some messages on eternal security from Pastor Prince. I finally stopped resisting and ceased listening with tradition-bound spiritual ears. Once I clearly saw this beautiful Gospel truth the floodgates of Grace cascaded over my heart and mind.

I would also like to share the testimony of a brother in Christ in his Grace awakening. I've known this brother in Christ for seventeen years. We met while attending the same church. While this church shared some good truths on redemption they flatly rejected the Grace Gospel in its fullness.

For the purpose of not naming him publicly, I will refer to him as brother Rich from this point forward. Brother Rich and I got along very well from early on. We shared some similar interests. One thing we've always enjoyed, to the annoyance of those closest to us, is the continued need to debate any and every topic imaginable.  Once I received Grace we debated continually, without resolution, the eternal security of the believer.

The truth about debate though is many times we are having a discourse on issues in the abstract. We are arguing facts and figures and what if scenarios and not actually addressing real situations. So my brother would oppose me on this Grace understanding. He too would have a observe and react theology.

However, his observe and react theology often times was from an abstract what if scenario. What if a believer did this? What if they walked away? What if a believer became corrupted? No matter the response he'd have another scenario or say he partially agreed but with a stipulation. Recall what I mentioned earlier about needing divine intervention in seeing the truth. There exist redemptive truths that only God can reveal or open your eyes too from the Word.

My friend heard me tell him the good news of Grace. I told him our salvation was eternally secure. Yet it seemed my words were like water sliding off a duck's back. It seemed brother Rich just couldn't receive or accept this truth. It wasn't until a situation arose that the debate we had in the abstract actually translated into the here and now. Not saying God ordained or created the situation but He did use it to reveal the truth.

Calamity had struck the community where he lived. A young man's life was cut tragically short. Brother Rich knew this young man. Brother Rich had taught him when he was but a boy in children's ministry. The issue was this young man had left the ministry that had rejected the Grace of God in its fullness. Religious systems had left this young man feeling empty and cheated. He turned to drugs and other empty things this World offers to dull that sting and pain Graceless tradition imposed upon him. Brother Rich was now forced to ask the question what of the eternal destiny of this young man?

The Lord was right there in His loving mercy and goodness with the answer. He took Brother Rich to the story of John the Baptist. In the Gospel of John , we see John clearly state his belief that Jesus is the Lamb of God, the promised Messiah. This was in the beginning of Jesus' ministry. Yet as time progressed, John sends messengers to Jesus, asking if He was the promised Messiah? What happened to John? He was experiencing a crisis of faith. Yet, we don't see Jesus disowning or forsaking him.

Brother Rich's eyes were opened. Just like John the Baptist, this young man had a crisis of faith. He hadn't rejected Jesus but religion. He had placed his trust in Christ as a boy. Jesus doesn't let go, His Grace is eternal. Brother Rich called me and shared what the Lord revealed and we rejoiced about this good news of Grace. He now sees a believer can't be corrupted. A believer is born again of incorruptible seed. He now sees and celebrates the truth of eternal security.

It is so clear. Why would Jesus suffer shame, shed His precious blood and die for a redemption that isn't sure and secure? It meant so much to God to possess our heart. Why would God be so quick to forsake or turn away from those who are experiencing a crisis of faith or belief?

This good news of Grace is made real when we come to know and understand our eternally secure salvation. Our salvation isn't dependent upon our goodness or moral excellence. It isn't resting on our ability to remain steadfast and unwavering. Christianity is not a probationary relationship with our good Father. Celebrate His faithfulness and Grace today.
Posted by John W Reed at 06:31