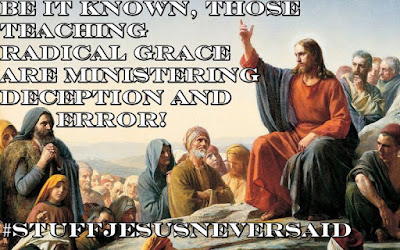 In the recent months, we've been in a series of study about understanding God's Grace. Currently, we have been dispelling the myths that are often associated with the teaching of Radical Grace. We've spent considerable time looking at God's correction methods and how He sees us when we miss it or fall short.

We've established a firm foundation that our identity is rooted in Christ's righteousness and obedience. When we miss it, the Spirit brings to our remembrance who we are and whose we are. This is good news. This is what brings change and freedom for the Believer.

With all this good news, some in the Church still lay the charge upon us that we are ministering false teaching or promoting error. Are we who minister God's Radical Grace infusing error to the Church? Would Paul the Apostle agree with that assessment?

6 I am shocked over how quickly you have deserted the grace gospel and strayed away from Christ who called you to Himself by His loving mercy. I’m frankly astounded that you now embrace a distorted gospel of salvation by works! 7 That is a fake “gospel” that is simply not true! There is only one gospel— the grace gospel! Yet you have allowed those who mingle law with Christ’s grace to confuse you with lies. Galatians 1:6-7 Passion Translation
Paul declared to us the only gospel is the Radical Grace of Almighty God. The fake gospel is that of works, achievement and effort. I believe Paul answers the objection that Radical Grace is false teaching. He clearly defines the gospel.

5 Even when we were dead and doomed in our many sins, He united us into the very life of Christ and saved us by His wonderful grace!...8 For it was only through this wonderful grace that we believed in Him. Nothing we did could ever earn this salvation, not even our faith, for it was the gracious gift from God that brought us to Christ! 9 So no one will ever be able to boast, for salvation is never a reward for good works or human striving. Ephesians 2:5, 8-9 Passion Translation

8 God saved you by his grace when you believed. And you can’t take credit for this; it is a gift from God. 9 Salvation is not a reward for the good things we have done, so none of us can boast about it. Ephesians 2:8-9 NLT

It is settled by the Word, Grace isn't some end time deception or faddish message. The Apostle Paul declared it was His grace, not our good deeds or actions that brought salvation. Radical Grace isn't some message that we overemphasize. It is the gospel of the Lord Jesus Christ.

So why do some reject and fight this message? Why do some ministers label it as erroneous? In the spirit of honesty, I will concede that some have misrepresented Radical Grace. Such as those who would encourage an acceptance of Universalism. But, those who follow that path are so minuscule. So what is the true reasons some reject Radical Grace?

Too many hold fast to the view that God is an angry God. That Father God is so displeased and disappointed in the Church. That He is just one Supreme Court decision away from decimating the Western Hemisphere. They see God as holding an account for all their misdeeds and missteps. They see God as one who withdraws from them whenever they blow it.


Some reject Radical Grace because of a menial self-image

Those with a menial image of themselves never see themselves as right before God. They see themselves inferior to others. These are they which cling to the "gospel" of status. They are in constant competition with others for God's favor and blessing. They're especially motivated to seek the approval of men.

Their wrong thinking won't allow them to accept that simply putting one's faith and trust and hope in Christ alone are enough to be forever forgiven and made holy and righteous before God. They believe there is something we also must do, such as keep the commandments perfectly. As a result, they always see themselves as unclean before God. They relish in concepts like I need a "clean" heart and continually pray "Lord create in me a clean heart". They  see themselves as never measuring up, that they could be doing so much more.

Those who use ministry as a tool to keep others "in line" will always reject Grace. In reality, the true motivation for control is fear. It is fear in the leadership that they won't have their personal needs met. It is fear that some in their meetings might pursue sin if they discover all their sins are already forgiven. It is also fear that the folks won't blindly listen to and applaud whatever they say.

Those who know and understand their freedom in Christ can no longer be dominated into submission by controlling leadership. Those under Grace can freely ask questions and search the Scriptures themselves and ensure what they are hearing lines up with the New Covenant. This isn't about encouraging folk to become disruptive, or "rebellious" and creating strife and division in a local church. It's about pursuing Christ and following Him and not men's traditions or helping a man to establish "his kingdom".

Some reject Radical Grace because of their efforts and achievements

Some reject this message because they look at their lifetime of spiritual growth and attribute it to the "sacrifices" they've made. To them accepting Radical Grace would diminish their achievements and efforts. This is clearly seen in the parable of the vineyard workers in the gospels. The eleventh-hour workers were paid the same as those who first began. Those who had put in more hours became bitter and envious.

What these should recognize are the sacrifice of Jesus and His Finished Work purchased and provided all we will ever need. These always insist there is some "price" we must pray to be spiritual. What price is it? Just how much prayer and fasting and giving will make us spiritual enough to minister healing or new life to another? The reality is this is all about prestige and status. Look at what I can do because I spent so much time doing this or that.

In summation, Radical Grace is the gospel. It is untameable by religion. It is uncontrollable by insecure leadership. It angers traditional religion and shakes it to its core, setting the captives free. This Grace honors Jesus Finished Work and once for all time sacrifice and it pleases our Father in Heaven.
Posted by John W Reed at 11:56

You're welcome. Thanks for the encouragement.

You need one more "reaction box". Personally, I'd recommend "amen", maybe with an exclamation point. I'd sure be checking that one. Word up! and thank you for your blog.

Thanks for that encouragement Penny. Blessings.