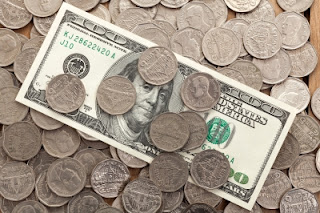 Therefore, whenever we have the opportunity, we should do good to everyone—especially to those in the family of faith. Galatians 6:10 NLT

The Gospel of the Lord Jesus Christ is the Good News of new life and total salvation for anyone who will simply believe. The Gospel is the Grace revealed in all Christ did for us. This love message must be proclaimed so people can hear it. In order to proclaim this Grace message through all means available, it takes time, talent, and funding.

When addressing this topic, some will be quick to accuse others that they don't want to tithe because they don't want to give. Those who say tithing isn't a New Covenant practice are just stingy Christians who are rebellious. Is this a fair assessment?

In truth, no matter what is taught about tithing, people who don't want to give will not give. In fact, for all this tithe talk, only 5% of Christians in America actually claim to tithe in the first place. So the issue is not that some teach tithing isn't for today but rather teaching the "why" we give in the first place.

However, this tithing burden being put on believers actually hinders gifts being given. What I mean is, if the "tenth" is the only offering God accepts or demands as some proclaim, then people who can't afford this amount just won't give. When we proclaim the New Covenant truth that Grace is the giving standard then saints will give that 1%, 2 %, that 7% with joy and be a blessing, and this Gospel will be funded!

If we stay with the New Covenant we will see gifts given and the Gospel proclaimed and the Kingdom advancing. However, when we stick with the works of men, tradition, and demands put on people all we see are negative fruits. We open the door to all these manipulative gimmick offerings.

Many proclaim that if we give ten percent we will be financially blessed. This sounds appealing but this sentiment is manipulative and merchandising the Gospel. It also places fear, pressure, and condemnation on believers.

Fear concerning finances comes because the believer begins to look at their own situation and sees where it could be better. They begin to worry if their lack of giving 10% is causing their finances to not be blessed. They fear if they don't give how much worse could it get?

Pressure comes because believers now must do all they can to ensure they can give ten percent. Giving is not from a heart of love but from an obligation that must be met. They are giving not to bless but to meet a requirement, no matter how palatable you make the appeal to tithe sound.

Condemnation abounds with tithe teachings. What about these believers who suffer loss, or go through major attacks by the enemy? How can they be expected to give a full ten percent when they have medical bills amassing? What about the sudden widow who was a stay-at-home mom? All they've heard is how they can't afford not to tithe.

The concept that God blesses those who tithe means God has exclusive blessing reserved for only a segment of His children. What about the single mom who had a terrible past who just got saved? Does God look upon her in disgust because she hasn't given Him ten percent?

I recently witnessed a minister who in response to the teaching that we aren't under the tithe command today, attempt to prove how we are cursed if we don't tithe. He tried to make it seem as if he was preaching good news by saying this. He also rebuked ministers who say the tithe isn't for today.

What I also noted was this same minister had no issue with the financial manipulation of his followers. He had no issue with the gimmick offerings claiming "God said there are ten people who are supposed to give $10,000 tonight."  Sadly, some only teach tithing so that their own bank accounts will be overflowing.

Many want to point to Abraham as the reason tithing is still for today. Look again at Abraham's tithe again. Abraham didn't tithe in order to be blessed financially or materially. He was already blessed before he gave anything away. His giving didn't create his wealth. Abraham didn't tithe from his income or his possessions, he only tithed the spoil of war, and only did it once.

Why do so many claim tithing makes them blessed? They cite the Old Covenant passage Malachi 10. Malachi is speaking of food for the Levitical priests, not money. Also, some who give become more frugal with their money and their budget, still others have high-paying jobs due to their experience and/or education.

Yet for most, the experience isn't that positive. I know of countless others who have tithed faithfully for years and they've suffered bankruptcy, loss of business, and some have even been laid off from work. Contrary to how it's marketed, tithing is not a rabbit's foot, Linus' blanket, or lucky charm that ensures you're never going to have a problem.

As New Covenant believers reject these gimmick-giving pressure tactics. Don't succumb to pressure-induced giving ploys. Don't look to your own works, your own doings, including your own giving, as a source of blessing. Look only to Jesus. Jesus became a curse on the Cross to redeem us from the curse. He exchanged our poverty and lack with His abundance and provision.

In summation, give in response to His Love. Give to further the kingdom. Giving is an expression of love. Give to support the proclamation of the Gospel of Grace. Trust in His Love to provide for you and give as He supplies and how He leads you.

7 Let each one [give] as he has made up his own mind and purposed in his heart, not reluctantly or sorrowfully or under compulsion, for God loves (He takes pleasure in, prizes above other things, and is unwilling to abandon or to do without) a cheerful (joyous, “prompt to do it”) giver [whose heart is in his giving]. 2 Corinthians 9:7 AMPC

Image courtesy of phasinphoto at FreeDigitalPhotos.net