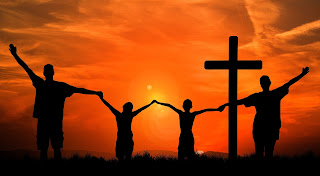 So you, my son, be strong in the grace that is in Christ Jesus.
2 Timothy 2:1

Sadly, many believers are strong in the religious tradition of men. They are strong in what they heard some minister say and not so strong in what God actually said. What we want to do is to get back to the truth of the Gospel and become stronger and stronger in the Grace of God.

One area that will help us become strong in Grace is knowing our forgiveness in Christ. Knowing just how forgiven we are brings a boldness and confidence in Christ.  It also brings about a greater love for the Father, for Jesus Himself said, he that has been forgiven much the same loveth much.

Forgiven completely or not?

Just how forgiven are we? Tradition has seriously muddied the waters with their confusing cocktail of partial forgiveness. The idea that only our past sins are forgiven but not our future sins. Or the strange concept that we are fully forgiven but only "judicially" and not "familial." These concepts are mere religious traditional double talk. Let's examine what God said and not what man says;

14 who bought our freedom with his blood and forgave us all our sins Colossians 1:14 TLB
13 You were dead because of your sins and because your sinful nature was not yet cut away. Then God made you alive with Christ, for he forgave all our sins. Colossians 2:13 NLT
12 I am writing to you, little children (believers, dear ones), because your sins have been forgiven for His name’s sake [you have been pardoned and released from spiritual debt through His name because you have confessed His name, believing in Him as Savior]. 1 John 2:12 AMP
2 He is the one who took God’s wrath against our sins upon himself and brought us into fellowship with God; and he is the forgiveness for our sins, and not only ours but all the world’s. 1 John 2:2 TLB
32 Instead, be kind to each other, tenderhearted, forgiving one another, just as God through Christ has forgiven you. Ephesians 4:32 NLT

I know who I choose to believe, God. I choose not to believe or accept the absurdity of religious tradition. I won't accept the foolishness of the traditions of men.

God declared we who've received Jesus are completely forgiven. Forgiven once for all time. If He declared us forgiven, who is man that may say, no God you're mistaken?

Religion says we are forgiven but not really. We are only partially forgiven. When you apologize, then God forgives you fully. Interestingly enough is that this isn't the standard God gave man when it comes to forgiveness.

Yet tradition says God has a completely different standard. He withholds full forgiveness until we apologize. Until we repent. So in essence, religion thinks man has a higher standard of love and forgiveness than God Almighty.

They claim, no we aren't speaking double talk, we are saying you're forgiven judicially just not familially. Wake up religious tradition you are speaking religious double talk. You're still claiming we're forgiven but not completely.

I am writing to you, little children because your sins are forgiven for His name’s sake. 1 John 2:12 MEV

Rejoice, when you received Jesus, you also received the complete and total forgiveness of all your sins. Your past and present and future, completely forgiven. We can now come before our Father in boldness and confidence because we are completely cleansed from all sins and totally forgiven.

The enemy and his accusations and condemnation and guilt and shame have lost all its power over the believer. When we know we are completely forgiven the lying shame of the enemy has no more effect. The Cross, the Finished Work, the Blood, the redemptive work of Christ, has rendered the enemy and all his schemes harmless and ineffective.

In summation, rejoice believers. You are forgiven. You are cleansed. All sins have been washed away by the precious Blood. We are forgiven, once for all time, all because of Jesus, the person of Grace.


Image by Gerd Altmann from Pixabay