Good News vs fake news: God's Grace can be abused 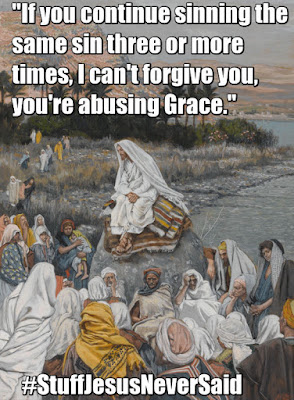 We've been in an extended study of the Good News of Grace. We've been exposing the differences between Good News and the fake news of religious tradition. I continue to stress that when we expose the traditions of men we are not attacking anyone. People are not our enemy. Holding contempt towards religious people isn't gracious or walking in His love. Expose the error and the false but love people.

Today, I sense the strong leading of the Spirit to expose a grand falsehood that's been perpetrated onto the Body of Christ. This idea that Grace, God's over the top too good to be true, but true, Amazing Grace, can be abused. I know this may cut cross grain to many teachings or thoughts. Just stay with me briefly.

In the Church, we've created buzzwords and phrases concerning God's Grace and the freedom it brings. Phrases like "cheap grace", or "sloppy agape" are common when referring to Radical Grace. Concepts like "beware of "hyper-Grace" that just leads to people abusing God's Grace" abound.

All through the Scriptures,  I find it strange as much as its preached, that there is no passage or verse referencing "cheap grace" or "sloppy agape." I can't find Paul saying don't abuse Grace. The reality is the phrase cheap grace was made popular by a German theologian. It was not rooted in the New Covenant but rather a personal conviction this brother had.

Grace by its very nature can't be abused

Let's just get right down to the root issue. We see believers sin and are quick to say, that's abusing Grace. We see a believer hear Grace and then proceed to live loose and in rebellion. See that right there? That is clearly one who is abusing the Grace of God? Are they?

Sin and what we do with it in our own lives and the witness we see others displaying leads us to address the issue as either walking in Grace or abusing Grace. This is where the controversy is. This is why some resist the Radical Grace of God.

The reality is the Grace of God isn't like insurance. Insurance is a paid plan to protect against loss. We pay premiums and when we use it, often we are penalized for it with higher premium rates. File multiple claims and you're considered high risk. Use it too much and you become a liability and are dropped.

Unfortunately, this is exactly how religious tradition sees Grace. Jesus paid a high premium by His death and shed blood. When we sin we are "using" this "insurance." Sin too often, the premium is raised. Now it's not just His shed blood, it's also your confession and repentance that brings the forgiveness. Continue in sin, and tradition says you're disconnected from God, the fellowship is severed. Persist in the same sin, and tradition teaches you're a liability to the Body of Christ and God "drops" you. That is you lose your salvation.

Grace isn't like insurance. God didn't see us in our goodness and say we merit salvation. God saw us in our darkness and stooped down in spite of our sinfulness. He became one of us and took upon Himself all the sin of mankind washing away sin and death and uncleanness with His Blood. While we were enemies Jesus did this for us. Now that we are sons and daughters why would He now stipulate His goodness on our conduct?

With this foundation established let's answer the main objection to Radical Grace. What about persistent sin and rebellion we some engaging in? Let's go back to the insurance illustration. If you saw someone repeatedly filing insurance claims on their vehicle would you say they are abusing their insurance? No, they paid the premiums. However, their premium is going to go up. We wouldn't label that as abuse, but rather a waste of money.

This is the revelation the Lord showed me. By its very nature, Grace cannot be abused. However, we can waste the Grace that's there for us by living in sin and rebellion. Grace is an unmerited gift to be received. If we receive the gift and decided to live in sin, it doesn't alter the truth that we received the free gift. What we are doing though is not opening the gift and utilizing it in our life.

A believer has received the gift, but if they got entangled in adultery, they aren't abusing Grace but rather wasting the gift. Grace leads us down the victorious path of goodness and blessing. Sin always leads us down dank, dark paths that lead to misery.

Think of it this way. If we get married but then never spend time with our spouse, never fellowship with them, never take time to cultivate the relationship, it doesn't mean we aren't married no matter how much time has passed. What it means is that we wasted quality time and fellowship and the benefits of that relationship.

Grace is the undeserved, unearned, unmerited favor of God, this Grace produces an empowerment once received. When we fail to take advantage of this empowerment we are wasting the gift. It doesn't alter our standing before God or the fact that we are saved. It just means we freely received a gift and decided not to do anything with it.

12 It’s true that our freedom allows us to do anything, but that doesn’t mean that everything we do is good for us. I’m free to do as I choose, but I choose to never be enslaved to anything. 1 Corinthians 6:12 TPT

In summation, Grace is unearned. Grace is a gift. By the very nature of a gift, it can't be abused. We mustn't embrace a religious concept of scarcity when it comes to God's love, mercy, and goodness. His love and kindness know no bounds or limitations. In light of this everlasting, unconditional, no strings attached goodness and mercy, let us take full advantage of His Grace. Don't squander it and waste it by pursuing lusts and sinful desires that will never satisfy. Embrace Grace and the new identity in Christ and see old ways of thinking and living lose their appeal and desire and walk in true freedom.
Posted by John W Reed at 12:31