Eternal Security: What if we forsake Him? 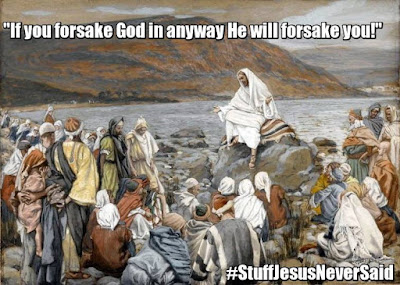 4 But then something happened: God our Savior and His overpowering love and kindness for humankind entered our world; 5 He came to save us. It’s not that we earned it by doing good works or righteous deeds; He came because He is merciful. He brought us out of our old ways of living to a new beginning through the washing of regeneration; and He made us completely new through the Holy Spirit, 6 who was poured out in abundance through Jesus the Anointed, our Savior. 7 All of this happened so that through His grace we would be accepted into God’s covenant family and appointed to be His heirs, full of the hope that comes from knowing you have eternal life. Titus 3:4-7 Voice

In 2 Chronicles a prophet of God spoke a word to King Asa. You can see the whole prophecy in context here. I would like to focus on one statement Azariah spoke.
2 And he went out to meet Asa, and said to him: “Hear me, Asa, and all Judah and Benjamin. The Lord is with you while you are with Him. If you seek Him, He will be found by you; but if you forsake Him, He will forsake you. 2 Chronicles 15:2 NKJV

Those are some pretty strong words from the prophet. If you forsake Him, He will forsake you. Those who've learned to rightly divide the Word based upon Old Covenant and New Covenant can rightly conclude this was a strong warning given under the Old. Yet many have adopted this same view concerning our salvation in the New Covenant. Many have concluded rightly that we can't lose our salvation, but by golly, we can forfeit it. This idea of walking away, forfeiting our salvation, "leaving it" or however it is labeled stems from passages such as this rooted in people's thinking.

Let's first analyze this passage. In context, it's not so doom and gloom filled as it appears. The king had just come back from a major battle where he was victorious. God, was, in essence, telling him to place his trust in Him and not his strength or own power. Sounds like Grace to me. Trust in God and not performance or self-efforts. Though there is some Grace revealed in this passage, there still exists this stern warning.

Understanding, that this is the Old Covenant, and judgment for sin and rebellion was swift. There was no mediator, no intercessor, and no price paid for sins. Also, the standard of Law was perfection. Yet, even in the midst of Law, which is a Covenant based upon man's ability to stay faithful, a system of do good get good, do bad and get bad, God's love was still clearly seen.

In order to see and understand God's Grace, it is paramount to understand the severity of God. He is a just and righteous God. Yet He is love and Jesus is Grace. I want to reveal to you this great Grace in action. As we know Jesus' birth didn't usher in the New Covenant. Galatians reveals Jesus was born under Law. It was the Finished Work that established the New Covenant.

Now that we've established that Jesus was abiding under the Old Covenant, let's look at an event in the life of Peter. Peter was very zealous and many times he leaped before he looked. Yet, with all his zeal Peter actually forsook our Lord. You can see it in full context here.

Here we see Peter curse and swear and deny Jesus. He forsook Jesus. Peter, therefore, should be forsaken by God right? This was under the Old. God shouldn't have anything more to do with Peter. Yet what is Jesus reaction to Peter's denial?

61 And the Lord turned and looked at Peter. Then Peter remembered the word of the Lord, how He had said to him, “Before the rooster crows, you will deny Me three times.” 62 So Peter went out and wept bitterly. Luke 22:61-62 NKJV

Peter looked upon Jesus, the face of Grace. Did Jesus curse Peter? Did Jesus say, "see you're a worthless disciple"? Did Jesus say "well, you forsake me, so I forsake you"? On the contrary, Peter saw Jesus and when He beheld Grace, the Lamb who was taking His place for all our sins, Peter immediately had a change of mind and heart.

Now look how God sees Peter after Christ's resurrection
6 but the angel said, “Don’t be alarmed. You are looking for Jesus of Nazareth, who was crucified. He isn’t here! He is risen from the dead! Look, this is where they laid his body. 7 Now go and tell his disciples, including Peter, that Jesus is going ahead of you to Galilee. You will see him there, just as he told you before he died.” Mark 16:6-7 NLT

God had the angel give a message to all the disciples. He specifically calls Peter's name out. He identifies Peter as a disciple, a follower of Jesus, even after he forsook the Lord. Why didn't God forsake him after he clearly forsook Jesus?

Because the Finished Work changed it all. Jesus took Peter's sin upon Himself. Peter under distress, fear and anxiety and extreme emotions forsook the Lord. Yet Father God still saw Peter as one of His own. In the gospel of John, we even see Jesus restore Peter to ministry.

We can learn so much from this amazing account recorded in Scripture. Even the worst sin has been forgiven in the Finished Work. Look at the promise from the Word.
And be sure of this: I am with you always, even to the end of the age.” Matthew 28:20b NLT

5 Let your conduct be without covetousness; be content with such things as you have. For He Himself has said, “I will never leave you nor forsake you.” Hebrews 13:5 NKJV

This is too good to be true but true good news. He will never leave us, abandon us or forsake us. If you look at this word forsake in the Greek it shows just how amazing His Grace is. The Greek reveals this word means to leave behind. To abandon. God in His goodness and Grace will never leave you behind.

This is amazing news. Religious tradition invents lesser penalties for our sins. God will distance Himself from you when you blow it. He will leave you behind if you go wandering. The Gospel of Grace reveals He will never leave or abandon you. If we walk away He is right there walking along side us.

Under Grace, we have received of the Finished Work. His blood has washed us clean and placed us in perfect right standing with God. We have become one with God by our union with Christ. We are joint heirs with Christ. We, therefore, can never abandon or forfeit our salvation in Christ.

Think of it, in Christ, believers possess the mind of Christ. We have been made new creations in Christ. His love has been shed abroad in our hearts. We have exchanged that old stony heart with the new creation heart. God Himself abides within us in the person of the Spirit. Our bodies are the temple of the Holy Ghost. Therefore, this New Covenant new creation righteous one, secure in the hands of Father God, cannot from the heart reject and forfeit that salvation.
Believers in Christ, rejoice we have permanent peace with Almighty God. We are no longer appointed to wrath but to total salvation in Him. God isn't angry or disappointed in His kids. We are forever secure in His hands, and we can rejoice He will always be with us. We are saved for eternity. That's something to get excited about.
Posted by John W Reed at 12:53