The Scandal of Grace: Grace that is Greater than our sin. 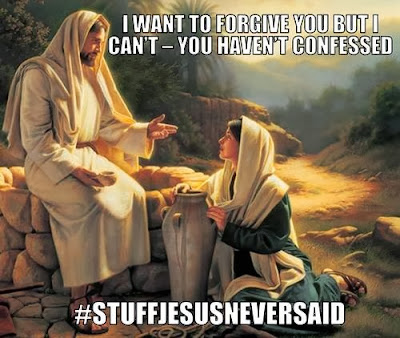 Grace, scandalous Grace, what have you done? Justified lost and sinful ones? Made them forever forgiven and acceptable to their Father above? This is exactly what God's Grace has accomplished. In our last study we saw how forgiven we are through the Finished Work.

In the study, I pointed out the objections religion has to the truth that we are forever forgiven. One objection I pointed out is this philosophy of judicial forgiveness versus actual forgiveness. I sense the need to expound on this erroneous idea, and once again reveal how greater His Grace is than all our sins.

Religious tradition has a cunning deception that has robbed many of their freedom in Christ. Some circles in the Church would flat out deny we are forever forgiven of our sins. They only see us forgiven up to the point of conversion. Yet, in religious traditional circles, there are some who will agree that we have indeed been forgiven of all sins past and present and future. However, this forgiveness is simply judicial forgiveness. When you do sin, you still need a parental or familial forgiveness from above.

Why is this? Because when you sin, you are out of fellowship with God, walking in darkness, and unclean. So you see with this philosophy, you are forgiven forever, but not really. You are still apart from God when you fail. To suggest that your sins can no longer separate you from God or that you are still in fellowship with God when you sin is heresy to these religious-minded ones.

Where does this teaching or philosophy find its roots? It is discovered in a misunderstood and wrong interpretation of 1 John 1. In their eyes, this first chapter of 1 John is written to the Church.
6 If we say that we have fellowship with Him, and walk in darkness, we lie and do not practice the truth. 7 But if we walk in the light as He is in the light, we have fellowship with one another, and the blood of Jesus Christ His Son cleanses us from all sin. 8 If we say that we have no sin, we deceive ourselves, and the truth is not in us. 9 If we confess our sins, He is faithful and just to forgive us our sins and to cleanse us from all unrighteousness. 1 John 1:6-9 NKJV
Because they ignore the entire context of the first chapter they assign these passages here to the Christian. How this philosophy goes is if a believer commits a sin, they are now walking in darkness. If we don't sin we walk in the light and have fellowship with God. So because of a sin we are now out of fellowship with God. If we don't agree we are still sinners we are deceiving ourselves. If we don't confess this sin we are not forgiven.
By taking four passages and assigning them to the believer this philosophy single-handedly has made sin greater than Grace in the minds of believers. In order to contrast all the Scriptures from the New Covenant that declares we are forgiven of all sin, they say these passages are only referring to judicial forgiveness. For the claims of the need for familial or parental forgiveness, this philosophy utilizes passages from the Old Covenant to "prove" the need for this other level of forgiveness the Finished Work didn't accomplish, but humans do by their continual "repentance" (Latin definition, turn from sin) and confession of sin.

Grace IS greater than our sin!

If those espousing this philosophy would simply look at 1 John 1 in full context it is easily proven that this is not written describing the believer. In the first few passages, John does not address the audience as the Beloved or the children of God. He contrasts those in fellowship with the Lord and those without.

For those in Christ, we walk in the light. For those who've yet to receive Christ, they walk in darkness. John is also describing a specific philosophy in these passages. Those of the Gnostics who denied Jesus came to Earth as a man and denied the existence of sin. He expounds the way of salvation for these sin deniers. This is God's Grace revealed. God showing the way for all to come to Him.

In the Second Chapter the first verse, we see John begin to address the Church.
1 My little children, these things I write to you, so that you may not sin. And if anyone sins, we have an Advocate with the Father, Jesus Christ the righteous. 2 And He Himself is the propitiation for our sins, and not for ours only but also for the whole world. 1 John 2:1-2 NKJV
Here it is made clear. Jesus is the propitiation for all our sins. In other words, His Finished Work satisfied all the claim of justice against sin. This is when John began addressing and encouraging the Church.

One last passage in 1 John puts the final nail in this false philosophy of judicial and parental forgiveness.
I am writing to you who are God’s children because your sins have been forgiven through Jesus. 1 John 2:12
Correct me if I am mistaken, but children would be speaking of a parental or familial relationship, right? Here, the Word of God declares we as God's children are already forgiven through Jesus Finished Work.

Don't allow the traditions of men to rob you of your identity in Christ. God's Word declared we are forever forgiven. This once for all time forgiveness is something we possess right now. We don't have to work for it, strive for it, or confess our faults, misdeeds and each failure to receive it. His Grace is greater than our sin.

Remove this idea of partial forgiveness. When we sin we are not walking and stumbling in darkness. We aren't out of fellowship with the Lord. We are in the light permanently, because the Finished Work translated us from the kingdom of darkness to the Kingdom of light. Jesus said He would be with us always. Religion panics at the hearing of this scandalous Grace. For it causes their control and domination of men to weaken and wane. Grace, scandalous Grace, frees men into a place of rest and freedom. A place where they can lay aside the burden to achieve perfection and be who God already made them.
Posted by John W Reed at 13:09