Lies Religious Tradition Taught Us: God is a mean and angry God 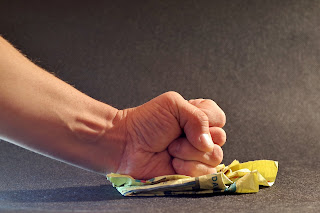 We've been in a series of study examining the lies religious tradition has taught the Body of Christ. Concepts taught with such conviction that it almost seems blasphemous to dare question them. Ideas taught for so long they've become strongholds in the minds of many believers.

So far we've dismantled the lies that God is the author of sickness and the creator of storms and disasters. That He creates evil for good to come about. That He wants us poor and poverty-stricken for His glory. That He is no longer moving in signs and Gifts and the miraculous. In our last study, we allayed the lie that Faith is powerless and ineffective in this day and age.

Today, it seemed good to tackle another lie. The idea, the concept that God is this big mean, angry, raging god who must be appeased by his people. It seems many believe God is angry and therefore many shrink back from Him. Is God this angry, rage-filled, deity pouring wrath upon the Earth?

Religious leaders and their disciples will see a calamity, such as fires, floods, storms or tsunamis and quickly assign blame at God's feet. That God in His anger is punishing people, cities, and nations for their great sins. They see God as angry and this becomes the motivation for service and what we do for God.

God is a Good and loving Father. He is Love. He is just. He is Holy. He is the sovereign One, that is the only God and creator. Though He has anger, He is Love. His perfect Love calms our souls and casts out fear. His great Love and Mercy and Grace causes condemnation to lose its effectiveness and fall away from us. His Grace silences the accusations of the enemy. This is who God is.

Let's look at God's anger. Let's see what God's Word declares.
Mark's gospel sheds some light on His anger. What makes God angry at this moment? He was angered at the hardness of the religious leader's hearts. We have a man who has a crippling ailment. Yet the religious aren't moved by compassion on his plight, no they're only interest is that their traditions are honored and kept.

This angered Jesus. What did Jesus do with this anger? Did He go beat up the religious leaders? Did He pour plagues on them? No, He took that anger and channeled it for good and brought healing to the man.

Do we all not have anger? Of course, we do. Aren't we told to have self-control? Aren't we told to be angry and sin not? We should give God a holy break! He knows how to control anger. God is all-knowing and all-powerful. He doesn't allow anger to determine or dictate His words, His thoughts or deeds.

Let's see some things God hates. Proverbs 6 gives us some insight. What do we see here? God hates division, strife, spreading lies and pride. What is Solomon saying? God is opposed to the opposition of Love. When people gossip, slander, spread lies, sow discord that is sowing seeds of discouragement, and division. This is contrary to love.

He also adds another category. Murder of innocent ones, hearts that devise wicked, or twisted, imaginations. Feet that are swift to do evil. This is speaking of actually harming others and it opposes the love of God. You can't love your neighbor if you're trying to kill them.

What else makes God angry? Again look at Mark's gospel, chapter 16. Here we see Jesus rebuke His disciples for their unbelief. Look how God describes unbelief.
12 Beware, brethren, lest there be in any of you an evil heart of unbelief in departing from the living God; Hebrews 3:12 NKJV

God calls unbelief evil. Why? Because in essence, unbelief says God I know you said you are good, you said you are love, you declared you'd do this for me, but I am not persuaded by your words and deeds. I reject what you're saying is true for me. Unbelief slanders and tarnishes God's name and character. It sets itself in opposition to God.

So we see what actually makes God angry. Things that oppose His love, injustice, trying to harm others, and unbelief. So let's see what doesn't anger God.

In Luke's gospel, we see an amazingly powerful event transpire. I know this is a long passage. Really read and study it. I love how the Word keeps reminding us that this woman was a sinner. The man is a religious leader. Take note of two distinct approaches to Jesus.

The religious leader never offered Jesus water to wash His feet. He didn't greet Him with a kiss. He didn't anoint Jesus' head. Yet this lowly sinner, who knew she was, in fact, a sinner, washed Jesus' feet with her tears and dried them with her hair. She kissed His feet. She anointed His head.

The religious leader looked at the woman with contempt. He questioned with an accusative mindset the validity of Jesus' ministry as a prophet. Yet Jesus saw her through the eyes of God's Love and great Grace. He used this opportunity to reveal the Grace of God to the sinner and to the religious.

What is amazing is Jesus' response to this woman. This woman was a sinner, and yet she sought Jesus out. Why? She knew she was a sinner in need of a Savior. So what was so amazing is that it is exactly who Jesus was to her.

Jesus received her. Take note Jesus didn't bring condemnation to her. He didn't cast judgment on her. He didn't berate her for her many sins. What did Jesus do?

48 Then He said to her, “Your sins are forgiven.” 49 And those who sat at the table with Him began to say to themselves, “Who is this who even forgives sins?” 50 Then He said to the woman, “Your faith has saved you. Go in peace.” Luke 7:48-50 NKJV
The sinner's great sin didn't bring out anger and wrath from Jesus. Her sins didn't cause Jesus to back away from her. He received her with love and mercy. What angered God was the proud religious leaders who refused to see their own need for a Savior.

God's Love and mercy is the motive for all we do. We give, serve, love others, and grow in relationship with God because of His great love and faithfulness toward us. We don't worship and serve God because we are trying to appease His angry side. He loves us and accepts us unconditionally and because of His faithfulness and love and acceptance and approval, we are faithful and walk in love and freely serve others.
In summation, God is not a bitter angry tyrant. He is not awaiting the moment someone fails so he can pour out wrath. He is Love. God has anger but His anger is a drop in the bucket in comparison to His exceeding Love. We can approach Him knowing He isn't mad at us.


Image by Henryk Niestrój from Pixabay
Posted by John W Reed at 08:55