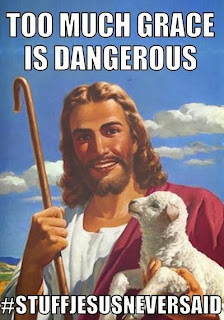 
We've begun a new series of study getting back to the basics of the Gospel of Grace. We're simply asking questions about Grace and seeing the answers from God's Word. So far we've seen what Grace is. We've addressed the issue of No condemnation.

Today, I sense the leading to address a question or rather a concern about Grace. Is there in fact too much emphasis on Grace? Can focusing so much on Grace really be dangerous? Is it really being out of balance to teach so much on God's Grace?

If you've listened to Christian radio and podcasts or watched Christian TV, or read any Christian periodicals over the last few years you might think too much Grace is in fact dangerous. Not all ministers and ministries share this sentiment but there are in fact some who seem to be "ringing the alarm" about Grace. To them, this is a major crisis affecting the Church.


What I am not saying

Let's clarify our terms so as to bring better understanding. I don't like to be misunderstood if I can help it. If a minister or ministry only preaches say one subject and neglects other truths like the Christian model of marriage and family or principles of prayer, or how to have peace in this troubled world or sharing the love of God I would agree that Christians need a balanced diet of truth.

That said, we must also realize there are truths of the Word of God that apply to all of these areas. Faith for instance. It takes faith to show love. It takes faith to forgive others. How so? Well God says He loves that individual and has a plan and purpose for them. Faith agrees with God and not any contrary circumstances. What if I fail to do this consistently? Now we see why Grace is also a truth that applies to all areas of our life and relationship with God.  So is there really too much Grace?

Let's be honest, when tradition raises "alarms" about too much Grace, is it because they are concerned we aren't also teaching enough about prayer, marriage, and family, or walking in love? No, they are concerned because of an "overemphasis" on Grace. Tradition really makes some strange almost contradictory statements when they raise these said "alarms."

"I am a big believer in the Grace of God..."
" God's Grace is of course extreme..."
"Yes, certainly, salvation is by Grace, we could never earn our salvation in any way..."

Great, we agree, Grace is over the top, amazing. Oh, wait there is a but coming.

"But Grace is just the beginning."
"But we shouldn't be extreme about Grace. To say He forgives us of all sins is extreme."
"But once we are saved our works show that we are saved. It shows we love God."

These paraphrased statements made up of many quotes I've seen over the years from tradition truly reveals just how much tradition misunderstands Grace.

But what about the Law and the commands of God?

The main issue many bring up is that too much emphasis on Grace deemphasizes the Law, and the many commandments we see throughout the Bible. My question when I hear these concerns is, what portion of the Law is applicable to Christians? Is it the command to not wear mixed garments? To abstain from eating rare steak?

Think I am over exaggerating? One of these tradition-minded preachers sounded the "alarm" about Grace by saying, these Grace people believe certain portions of the Bible no longer apply to them. Well, if all of the Bible applies to us, then we best get busy gathering wood to build a tabernacle and collect spotless lambs to begin to sacrifice. Any reasonably minded believer understands portions of Scripture written specifically to Israel don't apply to the Church.

Why do tradition-minded make such outlandish comments? Because they haven't fully accepted the Good News. They are still unconvinced our salvation and relationship with God is apart from all effort and is freely given and simply freely received. They feel deeply that there is still something that is required of them to procure it in their life.

Compounding this effort rooted and performance-based faith is their reactionary theology. They become aware of a Christians moral failure. They seek to understand why it occurred. They see that the person adhered to the message of the Radical Grace of God. So they figure, that's it. That's why they failed.

Tradition reasons then too much Grace is dangerous. What is conspicuously missing, is the fact that Christians had moral failings long before the message of Radical Grace gained such attention. I recall a particular famous minister many years ago who experienced a moral failure. He was a staunch holiness preacher. He preached against everything. What I noted was his teachings and theology was never questioned.

17 For the law was given through Moses, but grace and truth came through Jesus Christ. John 1:17 NKJV
Listen, Grace came through Jesus. How can something that is brought by Jesus be overemphasized? Too much Grace is, in essence, saying we can have too much Jesus. It's utter foolishness from the tradition of men.

Tradition views Grace as something that begins our relationship with God. After we are saved, Grace isn't important, it's all about keeping the rules, and submitting to God as the "master". They readily say salvation isn't by works but then preach strongly the need for Christians to get busy working. Salvation then is "God starts it and we finish it."

The real reason Grace seems dangerous is that it breaks the controlling yoke of religion off God's people. It opens the eyes of the blind and causes them to question the traditions of men. It changes the dynamics of relating to God from servant to taskmaster to a child and their Father. It forever removes the fear of loss of sonship, fellowship, right standing and the free gift of eternal life in Christ.

In summation, we can never have too much Grace. Grace and the Finished Work has application to every single aspect of the Christian life and relationship with Father God. What about the commands and the Law? Tradition likes commands and rules because it doesn't take much faith to live by rules.

Grace brings us into truly living by faith. We receive the Savior and He comes to dwell within us. His Spirit leads and guides us, and we know the Spirit would never lead us into immorality. Therefore the only commands we have in the New is to believe in Jesus and walk in the love of God. That is living by Grace through Faith and that leaves no room for the traditions of men and discourages self-efforts, strivings and a performance-based faith.
SaveSave
Posted by John W Reed at 11:50

God bless you. Thank you for this information.

Thanks, Douglas. Glad it blessed you, feel free to share it with others.