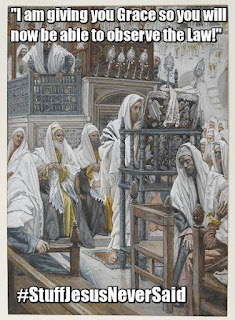 Even in the midst of His great Grace there still exists a prevalent uncertainty and debate raging within the Church of the Lord Jesus Christ. There exist an uncertainty about Grace. That too much Grace is dangerous and out of balance. This uncertainty finds its roots in a wide-ranging debate. What is this debate?

Books have been written and ministries established all for the sake of substantiating a certain view within the Body of Christ. What is truly amazing is with sermons that were preached, commentaries that were given, and objections raised all this effort was truly in vain. Believers are debating a matter that has long since been settled. This debate is the age-old issue of Law versus Grace.

There exist this uncertainty about Grace because some view Grace as only important for your entryway into salvation. In other words, Grace is great to get the lost undeserving one born again, but it is the Law that is most important because this is what sanctifies or sets the believer apart. The Law is what brings perfection and maturity.

So this uncertainty increases and finds strength and traction in the Church as a whole because some still wish to cling to the Law. When believers object and say we are under Grace, not Law the debate begins afresh. What the Church needs to grasp is the truth that the Law versus Grace issue was settled for us already by the Apostles.

I encourage you to study for yourself the account in Acts 15. I want to share with you the conclusion of the issue.
24 Since we have heard that some who went out from us have troubled you with words, unsettling your souls, saying, “You must be circumcised and keep the law”—to whom we gave no such commandment— Acts 15:24 NKJV
Here is the proof. This matter has already been settled. The Apostle James sometime between 48 and 50 AD already addressed the Law versus Grace issue. We have no command to follow the Law or observe the manners and customs of the Old Covenant.

Now the legalists and Judaizers object saying this was only an issue about those teaching we must be circumcised to be saved. That we are still beholden to portions of the Mosaic Law. Is this true?
5 But some of the sect of the Pharisees who believed rose up, saying, “It is necessary to circumcise them, and to command them to keep the law of Moses.” Acts 15:5 NKJV
It is clear, the legalists wanted the Church not just to follow circumcision but to keep or observe the Law. Just to note, this would include the practice of Tithing. It's also clear we aren't under any portion of the Mosaic Law.

What was the consensus of the Apostles?

11 We believe that we are all saved the same way, by the undeserved grace of the Lord Jesus.” Acts 15:11 NLT
We already know Paul's view. This is Peter's view. He saw clearly it's all by Grace and not Law. The debate is settled. We aren't under Law but Grace.
Some would still raise questions about James and his letter to the Gentiles. If you read Acts 15:19-21 closer one can readily see God's love and Grace. At this time, James knew Gentile believers and Jews were in close proximity throughout many cities. James gave these instructions to keep the peace and to ensure the believers weren't a stumbling block to the Jews. James had a heart for his people.

So the question is are we under Law or Grace? Is there still a debate? There shouldn't be. Acts 15 has settled the matter. As believers in Christ, we can rejoice because we have been ushered into a New Covenant. We are blessed to partake of a living and vital relationship with our Father. He isn't just our God He is our good Father.

We rejoice for God has set us perfectly free from this Old Covenant Law. We are no longer in a Covenant rooted in our ability to remain steadfast and faithful. A Covenant based upon our performance. We are in a New Covenant cut between Father God and Jesus the Son, where we are the beneficiaries.
5 So Christ has made us free. Now make sure that you stay free, and don’t get all tied up again in the chains of slavery to Jewish laws and ceremonies. Galatians 5:1 TLB
We have been made perfectly free from performance and Law. Now the legalist will still object even in the face of this overwhelming evidence. They point to Paul going into the Temple in Acts 21.
The Law was our schoolmaster. It was designed to show us our sin and inability to keep God's perfect standards. It was also given to stir up sin. It wasn't given to lessen it. The strength of sin is the Law.
We are now in a New and better Covenant. His Grace has greatly freed us from the bondage of the Old. We no longer have to have fear of letting God down. We aren't holding Him up. Rejoice we are completely free in Christ.
Next time we will address this issue of Paul going to the temple and answer the objections raised by the legalists on this matter of Law versus Grace. We will also address this teaching that Christians should observe the Sabbath or celebrate the Feasts. You don't want to miss it.
Posted by John W Reed at 08:23