Another Mistaken Idea: "Get Right with God"? 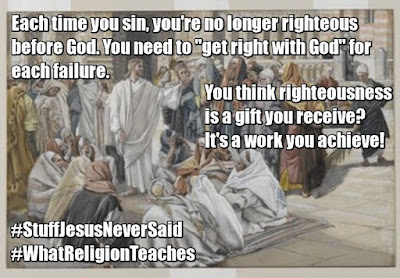 9 and become one with him, no longer counting on being saved by being good enough or by obeying God’s laws, but by trusting Christ to save me; for God’s way of making us right with himself depends on faith—counting on Christ alone. Philippians 3:9 TLB

Mistaken ideas are birthed in the minds of men when we take a religious traditional or experiential interpretation of the Word of God. Whenever we study God's Word it helps us to renew our minds to the truth of the New Covenant. Whenever I bring truth to remove a mistaken idea it is not the intent to demean or ridicule those who have not fully grasped the beauty of the gospel and New Covenant.


Get right with God?

This is a popular phrase in religious circles. It really struck me as a mistaken idea in the context it is most often used. In some cases, this phrase is simply defined as one receiving Jesus and trusting Him as Savior. I don't like the phrase when ministering to the lost because it connotes an image of an angry God who is so displeased with them, and hates their very existence until they are "right" with Him. Ministering to the lost is not usually the context of this phrase.

I've seen this phrase used in Christian movies. It is always in reference to a believer who has sinned. In one particular film, a zealous young believer wants to intellectually defend the existence of God to a couple of rowdy atheists. The problem? Oh my, this young believer hasn't been living a perfect sinless existence on campus. So because of this, he can't present the truth to these atheists because they will expose his sins. He bows out needing to instead spend time "getting right with God."

Another Christian film has some men who come together to swear and oath to honor and love their family and serve the Lord. Well, one fellow is involved in some felonious activity. Certainly, he ends up behind bars. His friend's advice? You need to "get right with God."

The concept behind this phrase is when a believer sins they must make amends with God. They need to get things "right" between themselves and the Lord. The Lord is displeased and disappointed in them, and, therefore, is out of fellowship with them. The sinning believer has "let God down."

The reason this is a mistaken idea and concept is that number one it overlooks the truth of the righteousness of the Believer. Secondly, it disregards the truth that God is no longer imputing or counting our sins against us. Let the Word confirm this;
5 But people are counted as righteous, not because of their work, but because of their faith in God who forgives sinners. 6 David also spoke of this when he described the happiness of those who are declared righteous without working for it
7. “Oh, what joy for those whose disobedience is forgiven whose sins are put out of sight
8.  Yes, what joy for those whose record the Lord has cleared of sin.”              Romans 4:5-8 NLT

The Righteousness of God in Christ

Blessed is he whose sin is not imputed

In Christ we rest knowing God isn't imputing or holding our sin to our account. Don't believe me? Allow the New Covenant to speak for itself.
12 For I will be merciful to their unrighteousness, and their sins and their lawless deeds I will remember no more.” Hebrews 8:12 NKJV
19 For God was in Christ, reconciling the world to himself, no longer counting people’s sins against them. And he gave us this wonderful message of reconciliation 2 Corinthians 5:19 NLT
12 He has removed our sins as far away from us as the east is from the west. Psalm 103:12 TLB
The Word has settled the issue. Because of the Finished Work and Jesus Blood we are redeemed and eternally cleansed from all our sins. How can we be letting God down and needing to continually get right with God each time we foul up if He says He remembers our sin and Lawless deeds no more?

Allow this mistaken concept to be uprooted from your thinking. Now if you have missed it, the Lord will bring correction, but it isn't because you aren't right with Him. Because you are righteous before Him, He will remind you of your true nature. He will guide you to live out of this new nature and not the ways of the World and your old ways of thinking. There we find freedom and experience the peace that is ours already in Him.
Posted by John W Reed at 11:44