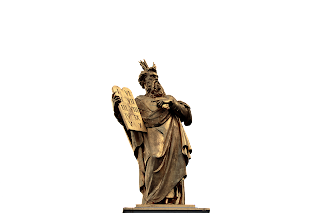 We've begun a study contrasting Law and Grace. Grace became a much-studied topic over the last few years. Yet with all the emphasis on Grace, many believers and various ministries still cling to Law in some form or fashion.

What is the Law? What is Grace? The Law refers to either the Ten Commandments or the whole of the first five books of the Bible, the Pentateuch. Some mistakenly claim the Law was only the Ten but tradition made it into the 613 commands Jesus lived under. Not so, the Law has 613 commands given by God, not tradition.

So what is the Law? The Law is the 613 commands given by God to the Hebrews. The Law is God's perfect standard. It is rigid and unbending. It demands and never supplies. Being under Law is living the Christian life legalistically. This speaks of one who follows, keeps, and abides in outward rules and regulations that produce no inward change. The Law is also any action, performance, or behavior engaged in, with the intent to gain God's love, goodness, favor, acceptance, mercy, and blessing.

What is Grace? Grace is the unearned, undeserved, unmerited favor of God. When this unearned favor is received, it produces empowerment, releasing His divine influence upon the heart. Jesus is the person of Grace. Jesus is the center of it all. Grace reminds us that the work is already done, finished, and has nothing to do with us, our part is to trust in, believe, and just freely receive.

With this understanding, we can further examine the contrast between Law and Grace. With this rooted in our hearts and minds, we can readily see the dangers of mixing Law and Grace.

Look at the temptation of Jesus in Matthew's Gospel chapter 4. Jesus was in the wilderness and the enemy came to tempt Him. Note the first thing the enemy said to Jesus.

And the tempter came to Him and said, “If You are the Son of God, command that these stones be turned into bread.” Matthew 4:3 MEV

The enemy is crafty and clever. Note how the enemy addressed the Lord Jesus. The enemy said, "if you are the Son of God..." This is the first clue the enemy gave away about his works of temptation. The enemy didn't call Jesus what the Father called Him.

This is what the Father Said to Jesus;

And a voice came from heaven, saying, “This is My beloved Son, in whom I am well pleased.” Matthew 3:17 MEV

The enemy didn't want to remind Jesus of what God said about Him. His temptation wasn't to break the fast. It's not a sin to eat or break a fast. Where was the command the Father had given Jesus to not eat for more than 40 days? So often tradition has read it into this passage that the temptation was to eat and break the fast.

Still others claim the temptation was to perform a miracle at the whim of the enemy. To prove His Sonship by doing a miracle. This is not plausible because of the response Jesus gave to the enemy satan.

What exactly was this temptation then? The enemy, refused to refer to Jesus the way God, the Father did. The enemy told Him to turn stones into bread. The temptation was for Jesus, the person of Grace, to find sustenance and life through the stones, that is the Law.

But He answered, “It is written, ‘Man shall not live by bread alone, but by every word that proceeds out of the mouth of God.’” Matthew 4:4 MEV

Jesus knew what the Father spoke over Him. He rebuked satan. He showed him that He was sustained by the Words spoken by God and not by performance, not by following the ministry of death and condemnation written on stones.

The enemy wants to tempt the Church into finding its sustenance and nourishment from the Law. Some teach that we need the Law to grow. That we are saved by Grace but sanctified by Law.

The enemy tries to convince believers that sure we begin by Grace, but our nourishment spiritually is to follow and abide under the Law. This is why so much preaching and teaching isn't centered around Jesus' Finished Work, but rather on our works, and performance. Jesus is removed from the focal point and our actions, achievements and accomplishments are exalted to center stage.

Grace counters this by reminding us of who we are, and what He said about us. Grace compels us to place Jesus back to the central focal point of our Faith. Grace reminds us we can't live up to the demands of the Law, but Jesus did and fulfilled it. We are no longer under Law but Grace.

In summation, let's not continue looking for our sustenance and nourishment and growth by living under Law. Let's live by the Words spoken by our Father. he declared it is Finished. Let's agree with that. Let's live life loved by our Savior, not by trying to become our own savior through, our doing more, performance, or good works. Jesus is our Savior not our behavior. Grace!