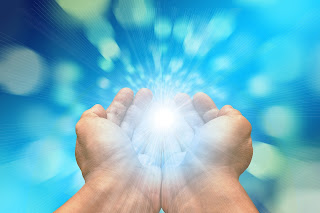 We've been in a series examining how Faith works. An important distinction must be made as we conclude this study. We are exploring Faith and how it works in light of the Grace of God and His Finished Work. Faith and Grace go hand in hand in order to walk in the complete victory Christ procured for whosoever will believe.

In studying how Faith works we've seen that Faith sees. Faith when continually fed the Word produces an image inwardly of all the promises of God. This Faith image not only inwardly illustrates the promise it also brings about an image of us actually possessing and walking in those promises of God.

Today, we want to conclude by looking at the last aspect of how Faith works. Faith receives. Faith is not passive or nonparticipative. Faith reaches out and lays hold on what Christ made available.

Not to bring shame or make light of someone but simply ask an average person what it means to receive. Many will conclude receiving simply means having a positive expectation of something good coming their way. That sounds nice but as we saw last week this is only hope in operation. This isn't how Faith functions.

Faith isn't passive or unresponsive. Faith is active and assertive. Faith lays hold of the purchased promises and provision the Finished Work of Grace and Redemption purchased for us. Faith receives it as its own. Faith lays claim to what Grace provided and refuses to be denied.

Name it and Claim it?

This phrase was created by detractors of Faith and propagators of unbelief and a powerless Christian experience as some sort of pejorative. It's used to describe anyone who believes Faith can change circumstances. That Faith can create a better life in the here and now and not just in the afterlife.

Thus said Jehovah, The Holy One of Israel, and his Former: Ask Me of the things coming concerning My sons, Yea, concerning the work of My hands, ye command Me.' Isaiah 45:11 YLT

God invites us to partake and freely receive from His kingdom. God welcomes us to take our place at the King's table. To freely partake of the King's feast and pull up a chair next to the King at His banqueting table.

Name it and claim it? The truth is God "named it" through His Finished Work. He already "named it" by His Grace and His Word agrees with and confirms it. We who walk by Faith are simply claiming what His Grace has already purchased, procured, and provided.

In summation, Faith works. Faith sees. Faith believes. Faith speaks. Faith receives. Take God at His Word. Believe Him and trust Him. He is a Good Father who loves us unconditionally. Lay claim freely to all that's yours because of Him.

Image by Gerd Altmann from Pixabay