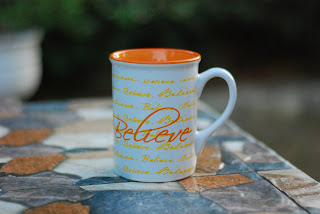 For in it the righteousness of God is revealed from faith to faith. As it is written, “The just shall live by faith.” Romans 1:17 MEV

We've begun a new series examining Faith, what Faith is and how Faith works. In our last post, we saw that Faith sees. That Faith has sight. Faith when fed God's Word and an understanding of God's extravagant Goodness and Love creates an image within our hearts of all God's promises to us.

Today, we are examining another aspect of Faith. Faith not only sees it also believes. To walk in Faith we must fully believe that what God has revealed to us is ours through Christ, truly is ours, in order for us to experience it.

Faith believes. We are to be persuaded by what God has said and not what the problem says. Because God is Faithful and so Good, our response should be to believe what He has accomplished in His perfect work of Redemption.

We walk by Faith, not by sight. We don't judge another believer's Righteousness and salvation based upon what we see. Sometimes we just encountered someone at their worst. They could be having a "bad day." They could be processing a challenge in their life and have not yet responded in Faith. In those instances, we just walk by Faith and agree with the Cross and what God's Word declared over the believer.

When it comes to Faith, much has been revealed concerning the power of words. Faith is released by speaking. As powerfully true as this is we must not forget believing is first and foremost.

for with the heart one believes unto righteousness, and with the mouth confession is made unto salvation. Romans 10:10 MEV

For most certainly I tell you, whoever may tell this mountain, ‘Be taken up and cast into the sea,’ and doesn’t doubt in his heart, but believes that what he says is happening; he shall have whatever he says. Mark 11:23 WEB

Jesus confirmed it here. It's not just saying it but also believing what you're saying that causes it to happen. If you don't truly believe, your words will fall flat failing to create the reality you desire.

Our belief is rooted in having a good opinion of God. We believe because we know He is a Good Father and that He is always Faithful to His Word. We believe because we know and understand God has accepted and affirmed the Finished Work of Christ. Studying, meditating, and continually reminding ourselves of all Jesus has accomplished on the Cross, ushering in the New Covenant, creates a fully persuaded heart.

The enemy of Faith is unbelief. The enemy works overtime attempting to get us to become dissuaded in God's Goodness and Love and more persuaded by negative circumstances and situations. The enemy wants to convince us that our problem is too big for God. Through lying symptoms he works his hardest to get us to believe God won't answer, won't come through, won't be there, and will allow us to be overcome.

When we agree with God and not our present condition or situation it silences the voices of the enemy, traditional religion, and the world system. This agreement and belief are completely rooted in the Goodness and Love of God. The vitalness of being persuaded by His Goodness and Love cannot be stated enough.

Look again at Abraham. Abraham learned Faith and how it works before the New Covenant. Abraham believed God and it was accounted to him for Righteousness. Abraham was fully persuaded that God was Good and Faithful. He received the promise because of it.

Faith believes. Faith is fully persuaded of what God has declared and all Jesus' procured in His perfect work of Redemption. Faith accepts and agrees with all God has said and done through Christ.

We aren't paupers begging for more meager portions. We aren't servants afraid to come forward hesitant to ask for sustenance. We are the children of the Most High. We are the King's kids. He has more than enough for us. He invites us to the banquet table to freely feast upon all He has provided.

In summation, Faith works. Faith sees and Faith believes. Faith is being persuaded by the Goodness of a Good Father. Focus on this Love. Meditate on this truth until it overflows your heart and mind. No matter your current situation or circumstance fear not only believe. Believe His Love and Goodness for you now!

Image by Lee Bespoke from Pixabay