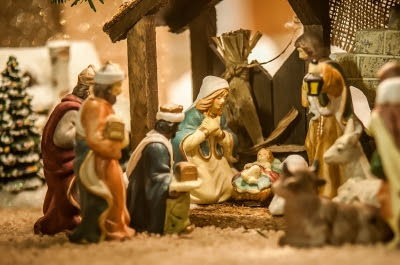 18 Now the birth of Jesus Christ was as follows: Matthew 1:18a

The Christmas season is a wonderful time of the year. It is joyous to celebrate it. In this time of year, we have the eyes and ears of many. Christmas carols are played in malls and town squares. People are singing about Jesus and uplifting His name and they may not even realize it.

With all eyes on the Church, let's stop perpetuating myths, and traditions of men. As one minister wisely said, they already attack the faith through evolution and other means to discredit the truth, why help in their assault on the truth by spreading lies? We need to stay with the Scriptures when it comes to proclaiming the birth of Christ.

UnScriptural songs, incorrect nativity scenes abound in this season. Let's share the true Christmas story free from tradition and have a greater impact. What am I referencing?

How many wise men?
How many wise men were there? Oh, that's easy three right? No, that is the traditional view. We can attribute this tradition to songs like "We 3 kings" and people not actually reading the Bible.

We are never told how many there were. We are only told they were Magi. They likely had some dealings with astronomy. We are not told how many there were. Some come up with three as the number because they brought three gifts. Let's stay with truth and disregard tradition. We don't know the number of the wise men. We just know that there were wise men from the East who came to see Jesus.

The Nativity scene
I know you spent money on that Nativity set. I know you bought those Christmas cards that depict the Nativity. You might want to reconsider once you compare those cards and sets with the Gospel accounts of Jesus birth.
If your Nativity set or cards have the wise men present then you just bought a religious tradition untruth. The truth is the wise men weren't there for His birth. That may be news to you but go back to Matthew and Luke and verify for yourself.

2 Now after Jesus was born in Bethlehem of Judea in the days of Herod the king, behold, wise men from the East came to Jerusalem, Matthew 2:1 NKJV

After Jesus was already born in Bethlehem, wise men from the East came. We are not sure the exact time but based on Matthew 2, it appears that 2 years have passed. Well, when did the Wise men come see Jesus?

9 When they heard the king, they departed; and behold, the star which they had seen in the East went before them, till it came and stood over where the young Child was. 10 When they saw the star, they rejoiced with exceedingly great joy. 11 And when they had come into the house, they saw the young Child with Mary His mother, and fell down and worshiped Him. And when they had opened their treasures, they presented gifts to Him: gold, frankincense, and myrrh. Matthew 2:9-11 NKJV

A young child isn't a baby. A young child in the house isn't a babe in a manger. The Scripture refers to Jesus birth as a babe wrapped in swaddling clothes. When the wise men came He is a young child. How could the wise men be at the birth of Christ, when it is clear they were still following the star while Christ was born in Bethlehem? The wise men weren't a witness to the birth in the manger.

What's the point? The point is simple. Let's share the story of the Savior's birth. But let's share the true story not a story muddled by traditions of men.

UnScriptural songs
This is one of those things that bother me. Traditions and untruths are perpetuated Sunday after Sunday by singing unScriptural songs.  I don't like songs based on Christianity that ignore the Word of God. At this time of the year one of the greatest unScriptural songs is "Mary did you know".

I know this song sounds sweet and sentimental and Christ-exalting but it's so Biblically illiterate. You need to go back and re-read Luke 1, here. Did Mary know?

If you read Luke 1, you will see Mary before she was pregnant the angel visiting her. So when she was carrying Jesus in her womb, yes Mary knew that her son was the Savior. You really want to make that song Scriptural? Then change it to Mary asking you did you know the child she was carrying can save you, deliver you or heal you?

This is the most wonderful time of the year. Jesus is being proclaimed all throughout the known World. People are singing carols and in unison, the planet is unknowingly declaring the glory of God. Let's celebrate this season of love, peace, and goodwill by sharing the true Christmas account not traditions of men passed down from generation to generation.
Image courtesy of digidreamgrafix at FreeDigitalPhotos.net
Posted by John W Reed at 11:36