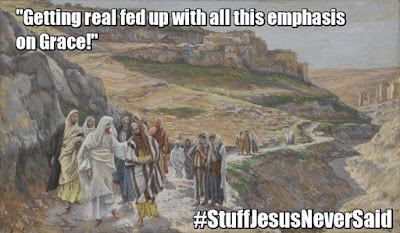 We are continuing our study of His great Grace. Last week we began touching on the tender subject of Grace and works. You can read it here. While researching the delicate balance of Grace and works I made an observation that I sense needs to be addressed.


Since the inception of this revelation, this revolution, this divine awakening, this reformation of Grace no sincere and fair minded believer can deny the impact it has had on the Body of Christ. Believers have reexamined their walk with God. Many reports of a fresh renewal and awakening of a personal relationship with God abound. Awareness of His Grace or the lack thereof is on the minds of believers.

In this environment, a response is necessary. Many embrace the revelation and reality of His great Grace. Some, sadly, distort and pervert Pure Grace with foolish philosophies like inclusionism or universal salvation. Still others, many in church hierarchies stubbornly reject Grace, preferring legalism and self-efforts and performance driven traditions.

Yet because of the immense impact and in some circles great excitement of Grace, traditional religion must have a response. They can't just preach against Grace. They can't just label it as heresy and move on. They don't want to isolate potential members to their churches. What is their solution?

They can't have that Radical Grace wreck all their traditions. They instead must adapt and rearrange wording to appear gracious. Let me give you an example to help illustrate this point.

In days gone by, the Charismatic movement and Word of Faith message like a wave overtook the Body of Christ. I will admit there was some excess in Faith circles and Charismatic meetings. That said these were genuine moves of God. I learned about the operation of His Gifts in the Charismatic church. I discovered who I was in Christ, what I have in Him because of redemption, and the authority of the believer in Faith circles. I realized I could trust God and take Him at His Word.

These moves became immensely influential in the Body of Christ as a whole. I observed over the years, their influence on some church groups and various denominations. For example, I saw many church groups began affirming who they were in Christ in their church meetings and Bible studies. Granted they didn't accept much of what Bro Kenneth E. Hagin or Frederick K.C. Price said but they sure liked the results of adopting some of the same practices in their meetings.

Presently, His great Grace is impacting the Church and the World alike. People are coming to receive the free gift of life in Christ. Believers are being freed from performance concepts and awakening to a sweet, life changing relationship with their Father. Not wanting to miss out traditional religion has now begun to adopt some of the language of Grace in their midst.

This is what I mean by religious Grace. You can see it on the signs outside their churches, they will place some hint of Grace in their wording. These are merely catchy slogans. They adopt the language of Grace but not the revelation and reality of Grace.

The truth is religion cannot deny or do away with their  requirements and rituals. They may wear casual clothes, smile with perfect teeth and style hair, but don't be fooled. They still cling to their religious tradition.

They're easy to detect, just listen to them.
"Yes we're righteous, but more importantly we must be living righteously."
"Righteousness is what He did, holiness is what we do."
"We're saved by grace but sanctified by the Law."
"Grace needs balance and boundaries."

Another way to detect the pseudo grace folk is to see how they define Grace. When they begin to alter the definition of Grace from unearned, undeserved, unmerited favor to something else beware. They put emphasis on what Grace produces not what it is.

I've heard preachers discount and downright deny Grace is the unmerited favor of God. They try to define Grace as an ability gift, as divine enablement. What are they really doing?

Religious Grace simply alters the definition and impact of Grace in favor of keeping their standards. Religion accepts a watered down version of Grace. They formulate a grace wherein all the rules, the regulations, the creeds, and the traditions of their particular church group are still intact and in effect.

Religion expresses Grace this way; grace is great, we concede, but you need to still be observing this or practicing that. To them, Grace is merely an empowerment to observe and keep all the rules. It's not Grace that produces change and growth. It is your effort, your striving, your determination, and discipline.

6 And since it is through God’s kindness, then it is not by their good works. For in that case, God’s grace would not be what it really is—free and undeserved. Romans 11:6 NLT

Grace is Grace, and works are works. Religious performance "grace" is not Grace at all. It is a mixture. Our Father isn't a harsh taskmaster driving us to produce fruit. Grace, the unearned and unmerited favor of God deposits fruit in our heart. Grace's divine influence produces new desires. It compels us through love to follow the good path of righteousness and peace.

In summation, embrace the pure Radical Grace of God. Don't accept substitutes. Don't follow a Grace mixed with men's standards, rules, rituals or regulations. Don't be misled by definitions of Grace that allow for the traditions and rituals of religion to stand alongside the free gift of Grace. If it's Grace, it is free, undeserved and impossible to achieve or earn. If you're hearing a message that says we can achieve more favor, blessing or peace by our doing more, working harder, performing better, realize you're not hearing pure Grace.
Posted by John W Reed at 13:33